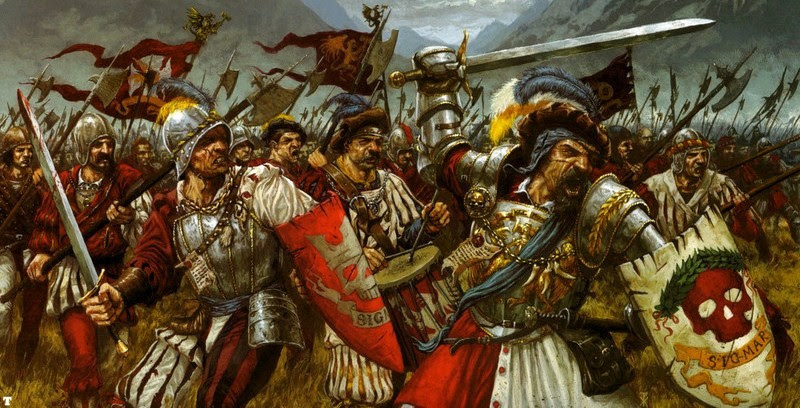 To follow up on my previous analysis of Warhammer 40,000, I thought it only fitting that I should address its source: Warhammer Fantasy, one of the most grim, down-to-earth "Tolkein-esque" settings there is. Unlike Warhammer 40,000, Warhammer Fantasy has a lot less to justify: It's the world of the 1500s with monsters and demons overlayed on it. No, really, look at the map. While many fantasy settings use existing cultures to influence their fictional ones, Warhammer Fantasy is "1500s Europe" in all but name - and even those names aren't fooling anyone ("Tilea" is "Italy"? I never would have guessed!). This means that it essentially has an existing framework for everything and can justify a lot more - unlike 40k, which required a lot of explanations for why society is basically in the dark ages when they're zipping around in spaceships. 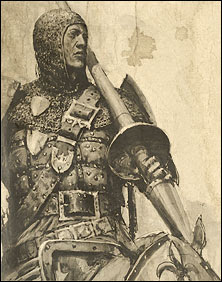 This, I believe, is one of its strengths. We already know the Warhammer world, because it's ours. Sure, it's our world from a few hundred years ago, but it's still our world. We can identify that the Empire is Germany, or that Bretonnia is France (combined with the Arthurian Myths), or any of the other connections. Other settings have their work cut out for them when it comes to connecting to the audience. Warhammer Fantasy just has to sit back and let history do its work for it. Of course, this is highly connected to the established artistic style that has accompanied Warhammer throughout its lifespan, but even that artistic style was made easier through that historical record. Instead of having to extrapolate what people of the future would be wearing, Warhammer Fantasy just goes ahead and gives everyone period-appropriate clothing, weapons, and armor. It all works because it's already "made sense" once before in real life. It also allows a lot of existing aesthetics to be used in a new context, that being the context of magic and monsters and other fantasy elements.

Because of those historical origins, Warhammer Fantasy is probably one of the most grounded fantasy franchises. Everything feels like something "real" interacting with something "fantastic": peasant levies with bows and halberds going up against monstrous rats, flamboyant Landsknechts fighting demons, or winged hussars battling ogres. Everything feels like steel and cloth and wood and leather, without delving into the more fantastic materials that many "High Fantasy" franchises explore. In the past I've talked about how armor design can influence believability; since Warhammer's armor is based on actual armor of the period, it naturally does quite well. Everything feels solid and real, even the fairly impractical (but justified) armor of the Chaos Warriors. In fact, I would say that the "normal" elements actually make the "fantastic" elements a lot more believable, in a similar manner to Demon's Souls. By establishing that the universe runs on "real rules", it feels much more impressive when a dragon or a demon or a giant is brought out. It's immediately visible that a normal human being is going to fight a monster, and more than likely they are going to lose one-on-one. 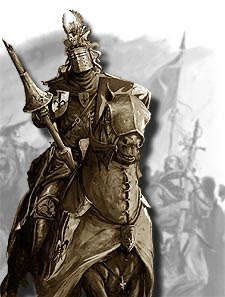 One important thing to note about Warhammer Fantasy versus Warhammer 40,000 is that the latter is an attempt to fit the former's dynamic. Everything takes place at incredibly short ranges, thus justifying the presence of melee weapons like the infamous chainsword. Space Marines are essentially "space knights", complete with heraldry and religious devotion. The armies of the Imperial Guard could easily be considered like the conscript armies of Fantasy shifted forward in time (although their weapons are kept roughly the same in terms of range). The Orcs or Orks are brutal and primitive in both settings, but in 40k they have to explain why they can make guns and spaceships (hence the "they innately know" explanation).

In Fantasy, however, the baseline standard pretty much works. The ranges are what they need to be, and the rules match the setting. The only thing that really needs to be explained are the Bretonnians, who operate on tactics and technology a few hundred years behind the setting's standard (maille and bows instead of plate and guns). This is justified by magic within the setting, but it's nowhere near as much of a stretch as "Orks literally make machines work by thinking they do". Magic in Warhammer is fairly subtle, and like 40k has negative consequences associated with its use (thus explaining why it hasn't replaced technology). In Warhammer Fantasy Roleplay, for example, wizard characters (rare as they are) will only be able to use a few cantrips until they hit an advanced career - but making use of those cantrips is part of the gameplay. 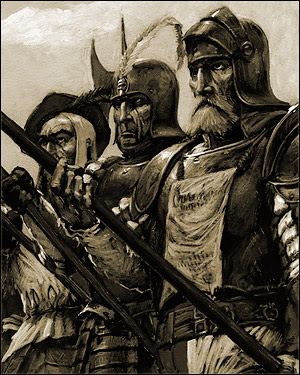 One aspect of this difference is the nature of the uniforms. Much like actual uniforms of the period, uniforms are bright and colorful, declaring the allegiance of the wearer right out in the open. This creates a function similar to that of the Space Marines, where a player can easily customize their own units and heraldry, or use an existing pattern. However, the uniforms worn by most troops are stylistically similar, but not actually uniform. In the game "Warhammer: Mark of Chaos", this is represented by having randomized parts for each unit, like so. This creates a sense of variety, but maintains the sense that everyone's in the same unit (in part due to the bright, identifiable colors). I thought this worked well in multiplayer matches, where the presence of things like banners made it easily identifiable whose troops were whose (which is the real purpose of having such bright uniforms), but the individual differences made them all feel like people.

One field in which I feel Warhammer Fantasy is inferior to Warhammer 40,000 is the issue of scale. In 40k, I liked the fact that there were a limitless number of worlds with different cultures, united by an underlying Imperial creed. In fantasy, there's certainly a large world (extending far beyond the reaches of Fantasy Europe), but there's a limit to it all. Not a huge limit, mind you, since most of the world is still unexplored, but still a limit. If you want to play Empire troops, they're going to be Empire troops. There's no room for the variety of 40k's Imperial Guard. Perhaps the variety of uniforms makes up for it, but that was one aspect of 40k that cannot be replicated in such a limited world.

However, a way in which Fantasy makes up for this is the use of mercenaries. Warhammer 40k is one of the most black-and-white settings, not with regards to morality but with regards to allegiance. Other than the rare Eldar-Human alliance, everyone pretty much just sticks with their own side. In Warhammer Fantasy the only real "permanent" enemies of humanity are Chaos and the Skaven. The Dogs of War can be hired by anyone except Bretonnia (for honor-related reasons), and their numbers range from the reasonable (crossbowmen and pikemen) to the unusual (ogres and giants) to the outlandish (a renegade elf mounted on a dragon). This makes the setting seem a lot less divided; war's just war, there's not necessarily a huge moral concept behind it all of the time. 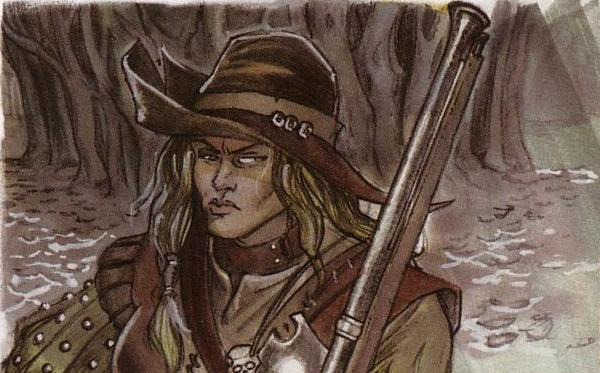 Characters in the Warhammer universe usually seem more relatable than most 40k characters, as well. Perhaps this is because of the comparative simplicity of the world, but it's established that everyone from the lowest peasant to the highest wizard or king is still essentially a person. A heroic, powerful person - but a person nonetheless. In 40k, the presence of things like personal force field and genetic mutation make the difference between "weak" and "strong" much more noticeable. There's no Space Marines in Fantasy, and while knights naturally take their role, they're simply more trained and better equipped than normal soldiers. Even an experienced character in WFRP can die in a few lucky hits. Despite the presence of magic, there's nobody who's really "superhuman" to the extent of 40k. Everyone is operating under the same rules of reality, even if they can use magic.

Given all these concepts - the realism, the grounding, and the lethality of the setting - I'd like to briefly examine Warhammer Online. While I felt that Mark of Chaos did a good job of trying to maintain the feel of the setting despite graphical limitations, I can't say the same about WHO. Compare this picture (from Mark of Chaos) to this one (from WHO). The proportions and materials are noticeably different; everything in WHO seems cartoonish and exaggerated, almost like it's trying to imitate World of Warcraft while still technically being able to call itself Warhammer. The gameplay doesn't really match up with the setting either. Warhammer is about things being difficult, but overcome through hard work and risk. Warhammer Online is an MMO. It takes iconic characters and classes and uses them, but it's nowhere near the same feeling as the rest of the universe. It lacks the same base of reality, which is not only an aspect of "believability" but also one of the series' identifying characteristics.

To sum up:
1) Warhammer Fantasy uses familiar history and transposes it with monsters and magic. This establishes familiar, grounded material and concepts while still allowing for more "fantastic" elements.
2) Unlike 40k, Warhammer Fantasy's gameplay is largely in line with its background, due to the established limitations on technology and development.
3) The grim lethality of the game emphasizes its basis in reality, rather than seeming like an artificial construct to make things more "dark and edgy".
Posted by J. Shea at 3:33 PM