Metal Gear Solid V: The Phantom Pain is almost upon us.

This is Hideo Kojima's last MGS game. Of course, every previous game was also his "last MGS game"; he famously claimed that he was going to quit after MGS2, and then again after MGS3.

But now he can't "quit". Because he's been fired. So the only way he would be able to continue making MGS games is if he goes out of his way to make them.

In commemoration of this, the death of a franchise, I think it's important to talk about what Kojima represents to gaming.

Hideo Kojima Represents The Fear Of Commitment In Games

Let's set down some facts.

Firstly, Hideo Kojima tries to make "serious games", insomuch as he (a) puts "serious topics" into his games, and (b) is praised by fans and reviewers for his inclusion of these topics. For example, both Shane Bettenhausen (formerly of 1up) and Dan Ryckert (currently of GiantBomb) have stated that they only know about PMCs because of MGS4. Both of them view this as a positive for the game itself, rather than a negative for their own education.

Bettenhausen's statements led into one of my favorite pieces of games writing - Shawn Elliott's "What I Like Least About MGS4 Isn't MGS4". Elliott's article illustrates one of the big problems with bad or lazy writing in games: the fact that audiences often can't tell it's bad, and usually don't care. Kojima writes about "serious topics", and his fans say that he's a genius, and that's sort of the end of it. They don't fact-check, they don't examine it critically, they don't care. They just sort of absorb whatever information he gives them, true or false.

And that leads into a second problem: he's not held accountable for anything, because he has an escape clause no matter what. I illustrated this concept with a flowchart: 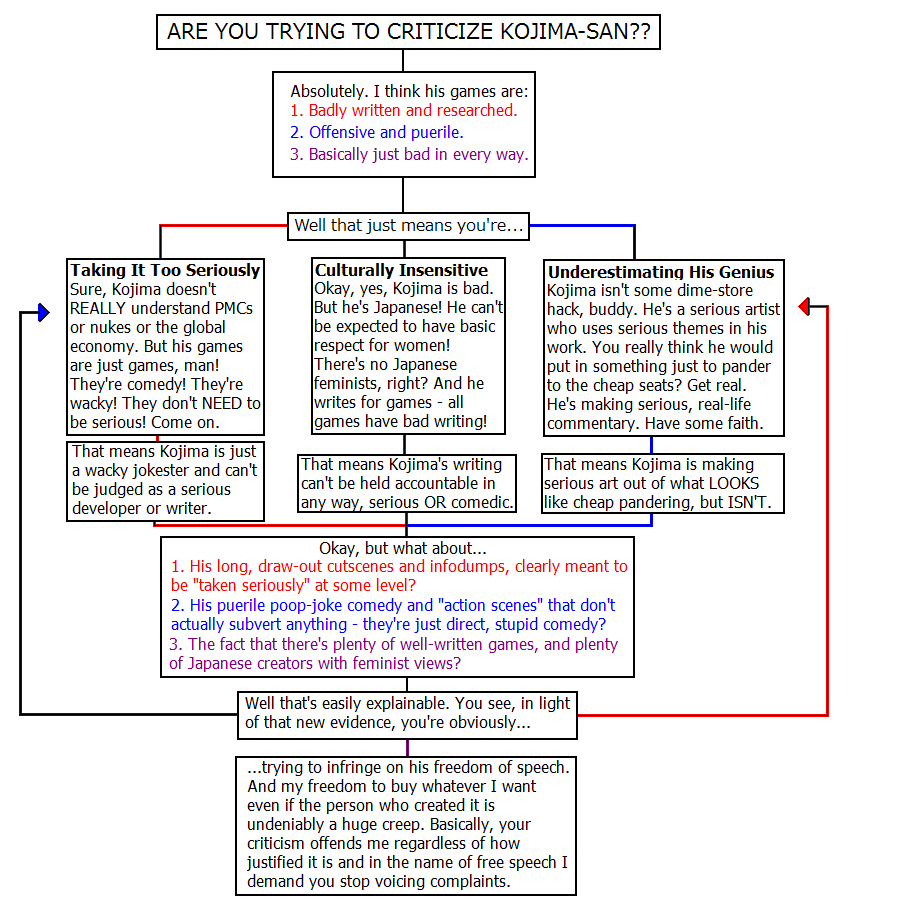 This is the issue: there's always an excuse.

If you look at Kojima's career, if you look at the protagonists he's written, there's a lot of trends that people really don't want to acknowledge. Gillian Seed, Jonathan Ingram, and the various incarnations of Snake are all fundamentally based on one character: Ryo Saeba from City Hunter. Ryo is a tough, cool, brown-haired bounty hunter who is also a "wacky pervert". By that I mean that he peeps on women, gropes women, and generally violates women's personal space, but it's played for laughs. We're supposed to see him as a normal, red-blooded man who's "good at heart", by which I mean he shoots bad guys.

Seed, Ingram, and even Snake are basically that model poured into different scenarios. Seed and Ingram are the most obvious; Seed hits on every woman he encounters, including a 14-year-old girl whose father was just murdered, and seems to have little respect for their autonomy or agency. Ingram goes further, unstoppably groping every woman he encounters without their consent and without consequence. This reaches its zenith when he starts groping his partner's 16-year-old daughter right in front of him, as his partner demands that he stops. The game, of course, never makes you stop.

But what about Snake? Solid Snake is a traumatized loner, a genetic freak bred for war who retires to a life of solitude in Alaska because he can't stand being around other people. And yet despite this, he ogles Meryl voyeristically, then angrily rebuffs her when she shows actual interest. In MGS2 he kisses posters for reasons that only Kojima will ever truly understand. In MGS4 he ogles Naomi's breasts and pretends to drop his cigarette while she's talking so he'll have an opportunity to look at her panties.

And that's not even getting into Big Boss. Pay attention to how this mission ends and remember: he thinks this girl is 15. And then in the next  game, that girl is raped, tortured, and murdered.

What am I getting at with all of this? It's the "Underestimating His Genius" column in the flowchart. Kojima isn't radically subverting standards with his treatment of sexuality - he's adhering to a classical model. Every time Kojima does something gross or weird in his games, he's just continuing what he's always done, because he's never really gotten punished for it. Even the people who think that stuff is objectionable end up making excuses for him. Why? Because if they admitted those flaws, then it might bring up problems with the rest of the game, and it might just turn out that the game itself is bad.

Kojima could have made Snake a rapist and people would still make excuses for him. Even people who consider themselves progressive would be hemming and hawing about "cultural imperialism" and "irony" and everything else. Even though Kojima has a history of fetishizing non-consensual interactions (voyeurism, ogling, groping), people would still go "well, Kojima can't REALLY be saying that rape is good, obviously it's ironic".

Because it's not about what Kojima wants, or what Kojima thinks. It's about what his audience wants to believe he is: a serious artist, but also a wacky funster. They want to enjoy his games without feeling bad about it. They want "fun". People hate thinking about where "fun" comes from.

I'll close out with my favorite anecdote about Hideo Kojima.

By sheer chance, it's also the only Metal Gear Solid game his son liked.

Then Kojima released Peace Walker, an obvious successor to the Portable Ops model. In that game, Kojima dismisses Portable Ops with a single line (the only mention of PO in another MGS game):

Miller: Finally, we can leave all that crap in San Hieronymo behind…

This, to me, is the real Kojima. The real Kojima is a guy who gets jealous about his son liking a game he didn't make and responds by one-upping it (because he has a larger staff and budget). And then that's not enough, so he makes sure everyone knows that it "doesn't count", and denounces it whenever it comes up.

That's your "artist". A petty, ignorant creep who's somehow convinced everyone that he's untouchable. An "ideas guy" who gets praise because he's got millions of dollars and hundreds of employees, both of which were supplied by a company that everyone now knows was abusive as hell.

And people are going to keep giving him money because, hey, why not?
Posted by J. Shea at 11:01 AM 20 comments: