Hideo Kojima Wishes He Had Thought Of Breaking Bad

I can't even laugh about this anymore.

"The kind of topics they're handling in Breaking Bad, the way they express them and put them on screen, let's say I tried to create a game with similar topics and similar expressions, it would be hard to get approval in the company. The way these guys are putting the planning for this project and making it a commercial success - that's somewhere I feel very jealous as a creator."

I'll make one admission: it is possible - possible, but not likely - that I overestimate Kojima's creative control over his product. It is certainly feasible that he didn't want to include a sexy sniper babe to boost figure sales - that without the interference of the rest of Konami, he would have made a completely straightfaced story about child soldiers and CIA torture and sewing bombs into peoples' abdomens. It is possible that the goofy things throughout the rest of Metal Gear Solid were foisted upon him by the company.

But we still have to judge MGS; we still have to see it as the result of ideas, some of which are problematic, that leads to a completed video game product. This gives me the unenviable task of separating Kojima's "real thoughts" from the company lines he is contractually obligated to support. Was it Kojima's idea, or the company's idea, to have the bosses of MGS4 be played by supermodels? Was it his idea to sexualize women with horrific backstories of abuse and murder, or was that the company? Was it Kojima's idea to make the poopy guy fall in love with Meryl and then turn into an action movie badass? I know for a fact that he wanted Metal Gear Rising to be about Grey Fox and not about Raiden, so I can't blame him for anything in that. Was anything related to Peace Walker Kojima's idea? Is Kojima even a real human being, or is he a marionette assembled by the Konami corporation to have a relatable goofball behind their coldly calculated corporate products? In short, is Kojima a piece of shit, or does he just make games for pieces of shit? This might seem like a simple issue, but it kind of calls to question the whole "art" angle of  video games. If you literally cannot tell if a game is designed for the artist's preferences or "just to sell", is it really worth anything? Also, why is it that the people who want games to be considered art will also go out of their way to defend pandering, stupid decisions even when they're explicitly stated as such?

Anyways, if you want the Breaking Bad of videogames, play Liberal Crime Squad or Swat 4 or, hell, maybe even try out Floor 13 if you're okay with going a bit afield. All of those are games that exist, made by small, dedicated studios without grandiose ideas of billion-dollar profit margins, more concerned with delivering a small-but-tight experience with meaningful decision-making. So maybe Hideo Kojima should just fucking quit and start his own studio, is what I'm saying. It worked for Peter Molyne-oh wait no

During development of Metal Gear Solid 4: Guns of the Patriots, Hideo Kojima wanted the Beauty and the Beast Unit to be naked during cutscenes, though this would have severely affected the game's censorship rating.

Men climb the mountain to reach the top.

There's a paradigm in our culture. It's called "I can tell fiction from reality". It's a statement used in reference to escapism that contains elements and actions that are considered immoral or wrong "in real life" but are okay in scenarios where no real people are hurt. For example, material that involves the protagonist committing murder, torture, rape or acts of pedophilia are all defended under this argument. The core of the argument is that while it's acknowledged that a character's behavior is disgusting, it's okay to draw pleasure from it because it's happening in a caged, unreal environment. As long as nobody is really hurt, you can do whatever you want.

I won't say that there aren't truisms found in this argument. I'm certainly not going to argue that people who play violent video games should be locked up, as much as I'd probably enjoy a world free of them. But it's an oversimplification of one major element, which is this: the things we draw pleasure from have reasons behind them. You're not gardening, you're not driving a bus, you're not mowing the lawn, you're not painting your house. Your escapism - your alternate world, constructed purely to give you pleasure - involves murder. Specifically, it involves power. Escapism, 95% of the time, is about having power, and often about having power in such a way that you don't feel bad about using (or abusing) it.

That image at the top shows why there's a gaping weakness in this argument - a massive, uncovered, festering wound that people like me can jam their fingers into and then start pulling apart. The fact of the matter is that words like "badass" and "awesome" don't exist in a vacuum - they're appealing to concepts that people have been trained to value and enjoy and consider important. For men, appealing traits generally exist with a few core concepts.

"Badass" men are powerful. They are strong, rich, fast, etc because these characteristics allow them to influence others without being influenced themselves, which is the basic goal of the pursuit of strength. "Badass" men are composed, detached and stoic. They are not affected emotionally unless it is appealing for them to be, which is to say they do not show fear or weakness, but will exhibit grief when it can be turned into righteous anger. This ties into power; a real man does not allow himself to be affected by others even in an emotional sense. It is okay to show anger, because anger is a prelude to violence, and violence is the man asserting power and dominance over others. Fear, on the other hand, is a prelude to having power asserted over one's self, and as such is unappealing for a male character.

In short, characters like James Bond - who represents "the top of the mountain" in the opening post - exist in such a way that they are able to influence others without themselves being hindered or weakened or trod upon. Even when they are tortured and beaten and stabbed and shot, they grit their teeth and bear it, knowing that their chance will come to exact revenge, and that revenge will be all the sweeter for the grievances inflicted. Similarly, it's okay for such characters to have character flaws like alcoholism or drug addiction, as long as the manner in which they deal with such things is stoic and detached and not pleading or pathetic. They needn't be a braggart, either - think of characters like Solid Snake who are constantly asserting that "they're no hero", and how every insistent repetition of this fact just makes them seem humble and, ergo, more awesome. Every trait comes down to power, a perpetual need to be on top of situations even when those situations are specifically centered around being weak or downtrodden.

I'd like to talk to you about James Blake Miller briefly. You may remember him better from this picture: 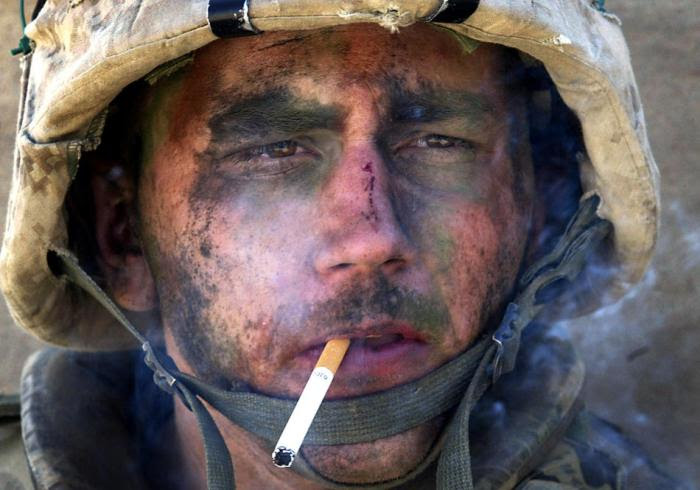 When this picture was taken during the Battle of Fallujah in 2004, it was held up as one of the best pictures taken from the war. The New York Post splattered it across their front page as an icon of success, of tough American soldiers kicking ass in the face of fierce (yet cowardly and conniving) resistance. The thousand-yard stare of a man who had just emerged from a hellish warzone and was taking a brief reprieve before re-entering it was interpreted as the cool glare of a detached and stoic warrior who was able to kill his enemies without emotion or regret or remorse.

On his return home, James Miller suffered from severe Post-Traumatic Stress Disorder. Of course he did. He was involved in the most intense urban theater of the Iraq War, during which time he was constantly in fear of death coming from any direction. He watched friends die, and knew that at any time he could be next. It didn't matter if it felt like he was safe - RPGs and mortars don't care about walls. He knew these things. Even when he returned to the United States, his body and mind were trained to live in fear, to be paranoid about every whistle and sound and sudden motion and loud noise.

In 2005, while preparing for disaster recovery efforts for Hurricane Rita, Miller was involved in an incident where he attacked a Navy seaman. This came after the seaman had whistled in a way that mimicked an RPG's signature trail, which Miller believed was done intentionally to upset the marines present. In 2006 he got married, which was made possible thanks to the donations of people affected by his story and his trauma. Less than a month later he was divorced, unable to live in normal conditions due to his PTSD.

James Miller is a warrior, a stone-cold killer whose icy glare and drooping cigarette are iconic images that will endure for centuries to come. He is a model for children to follow, like Clint Eastwood or John Wayne or Max Payne or Adam "Kane" Marcus or who the fuck ever else you want to name. James Miller is a human being who has difficulty functioning in our society. He is a man who lives in fear because he somehow survived an event that could have killed him at any moment it damn well pleased and his body and mind are so tensed up that resuming normal life is almost impossible. He is a traumatized individual whose sacrifices seem hollow and meaningless in retrospect, who has survived while watching friends die, who endures and can't really explain why he does.

"I mean, He must think I deserve to fuckin' be punished baaad. And the only reason why I can figure that I'm still alive is that this is God's way of letting me feel the guilt for all the bad shit I did. Because there's not a morning when I don't fuckin' wake up and the first thing I think is, 'Another day I'm here.' What did I do to make me deserve another day? What have I done in my life that my buddies didn't do to make me deserve so many days?"

You want to know how I can tell people can't tell fiction from reality? Because if they understood reality, they wouldn't idolize the image of a badass murderer in the first place. It wouldn't give them pleasure to pretend to be those people, and it wouldn't make sense for them to think of such people as being worthy of emulation. There wouldn't be people who look at Rorschach and think "yeah, that guy makes a lot of sense".

But they do. They think of people like that as "the top of the mountain". They think of war and killing as baptismal waters that transforms untested boys into hardened men. They think that it's the goal of the male animal to become sharpened, focused, stoic, detached. They think that men are killers, even if they have to obey laws. They wait, primed and ready, for a moment when some thug tries to mug them, some shithead breaks into their house, some little old lady gets attacked on the street. They wait for a chance to commit murder in such a way that it's societally condoned and justified and even heroic, like a firefighter hoping for an arsonist or a doctor hoping for a plague.

The mountain isn't real. And if you think you're at the top of it, you're fucking deluding yourself.