Before I start this, I'd like to dedicate this article to S.R. Holliwell, the author of a well-researched and well-written set of analyses on the works of Hideo Kojima with regards to depictions of misogyny and transphobia. These articles have been stricken from the internet, I assume because she got tired of being harassed about them. If there is one person in games who should have been writing, whose works should have been getting recognition, it's her, and not people who are writing about how games need to be More Fun And Less Serious, or about how games journalism is Totally Corrupt (for the ten thousandth time).

Anyways, on to the article. 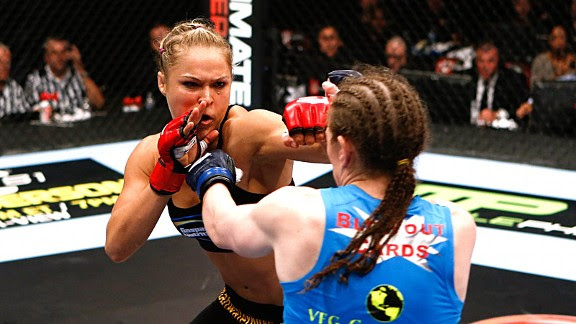 The second most-read article I've written was "How To Write Empowering Female Characters". In that article, there was an examination of the concept of "agency", as well as the greater concept of portraying characters as though they are people and not just cardboard cutouts. Pretty simple stuff. At the end I mentioned WWE wrestler "Kharma", who differed from other women in the WWE because she was presented first and foremost as an aggressive, powerful figure instead of eye candy. I mentioned that the WWE should consider hiring some female MMA fighters to add that sort of credibility and power to their women's competitions.

But I never wrote an article about female MMA fighters, and that's basically a huge oversight on my part, because essentially Women's MMA is 90% of the things that I wanted out of videogames before I gave up on them as a medium. Here's the checklist for depicting combat well:

1) Combat is realistic and meaningful.
2) Combatants dress and behave in ways that indicate they are taking things seriously.
3) Combat, and its participants, are treated with respect.

These are pretty simple rules, I think. I'm not going crazy here (at least, not with this specific set of rules). And there's games that fulfill those standards - well, a few at least. Tom Clancy's stuff was pretty consistently good about that sort of thing. Rainbow Six 3 was a respectful, realistic, intelligent shooter that easily included female characters with no major overhauls necessary. GRAW2 has the best "tough lady" faces in video games. But most of the time, games are pretty dumb about this, because games make combat to be "fun", and by being "fun" they also end up being "stupid".

Whereas, conversely, MMA in real life is a sport where people are getting punched in the head. As a result, competitors and spectators tend to take it pretty seriously. They wear practical clothing. They do their hair up so it can't get yanked around - and if they don't, they at least know there'll be repercussions. They're not there to "look good", they're there to fight. It's simple stuff. And it's basically all I wanted out of games, at least in terms of depicting characters.

So here's the funny thing about women's MMA, right: I don't have a lot to talk about. It's basically fine. Women are competing seriously. The commentators are treating them respectfully as athletes and fighters. You get cool natural moments because this is an actual fight instead of a staged event. Everything is right where it should be. I mean, the thing is, everything that happens around it is more balanced because there's that strong core of serious respect. There's women in MMA who flaunt their sex appeal, and the difference between that happening in MMA and that happening in a video game is pretty obvious too: it's a real woman doing it, under her own agency. She's not being disrespected for it. It's simple stuff. That's the thing about MMA, though - it's real. It treats fights like they're real because they are. It treats women like they're real combatants because they are.

It'd be silly to say that there are no problems in the MMA world, but compared to gaming it feels like there's a more real chance of actually undoing those problems. Yeah, Dana White is a misogynist asshole, and the entire Invicta company was founded as a way to get away from him, but hey. Martial arts is founded on principles of respect. You know what isn't? Gaming. There is no underlying expectation of respect in gaming. The only principles in gaming are "if people will buy it, make it". Anyone can throw out a "market research" explanation for depicting women in a certain way, or, failing that, they can go for the equally eye-rolling "artistic license". You don't get that shit with MMA. Fights are fights.

Of course there's still assholes who follow MMA - it's a bloodsport, after all. Of course there's still people making derogatory comments about WEAKER WOMEN. Of course there are MMA fighters who are pieces of shit. It's an inevitability. It's still an event that takes place on Planet Earth, after all. On the other hand, you have companies run by and for women - the kind of thing that would get overwhelmingly swarmed and harassed in the gaming world. You have a backbone of "this is real combat" that adds a level of objectivity to the proceedings. There's a strong core foundation of "hey, this is a serious sport" that helps solidify the community in the face of shitty human beings. Gaming would be fucking blessed if it had a single woman - fictional or non - as intense as AnnMaria De Mars. Fighting is serious fucking shit.

Sometimes I wish I'd started taking heroin instead of getting into videogames. It'd probably have been healthier overall.