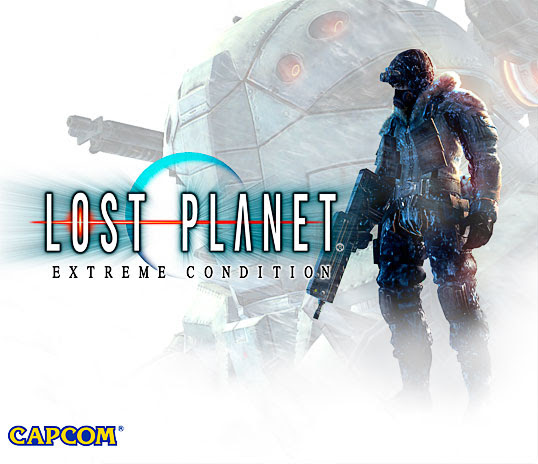 Lost Planet is kind of a weird franchise. It's simultaneously silly and sensible - there's a lot of stuff that doesn't make sense, but it's usually internally consistent enough for it not to be distracting in the long run. It's not realistic by any stretch of the imagination, but it at least puts a lot into the details. Like Star Wars, it's unrealistic in a grounded enough way that the larger issues don't matter. So, without further ado, let's examine the design and universe of Lost Planet.

Background/Setting
Lost Planet takes place on E.D.N. III, a frozen planet colonized by humans in the future. This colonization was interrupted by native bugs, the Akrid, who later turned out to be full of "thermal energy" (T-ENG), which can naturally be used as an energy source. In short, it's like an oil metaphor attached to the movie version of Starship Troopers: kill bugs, get money. Most of the planet's inhabitants are stranded colonists trying to make do with what they have, and maintain enough Thermal Energy that they don't freeze to death. 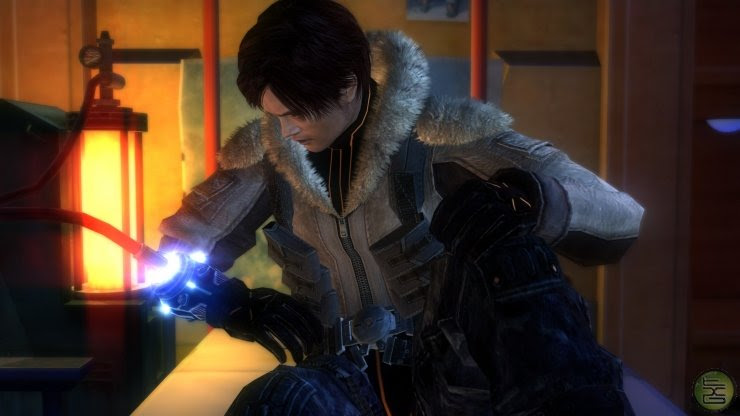 Thermal energy is interesting in that it serves as both a gameplay mechanic and an in-universe motivator. The goal of the factions in Lost Planet is generally to acquire T-ENG, but you collect it in-game to power your regenerative abilities (via an item called a "harmonizer"). In LP1, people basically need thermal energy to avoid freezing to death, which is emphasized by dead Akrids instantly freezing and shattering once their thermal energy has been spilled out of them. In LP2, there's levels in jungles and deserts, so the whole "thermal energy" thing makes a lot less sense.

The cutscenes indicate that there's always a need for T-ENG, and even big tanks of it will only last a few days - less if there's combat involved. The economy of  T-ENG is pretty weird, because going out and collecting it by killing Akrids often costs so much that it's not even worth it. However, in the immediate sense it's at least plausible - Akrids are full of T-ENG, you need T-ENG to regenerate or power mechs or whatever. It's a good connection of story to gameplay, but it doesn't make that much sense in the larger scale. On the other hand, the cutscenes at least admit that deposits of thermal energy are temporary, instead of having it be treated like a long-lasting sort of riches. It's closer to gasoline in Mad Max than anything else. 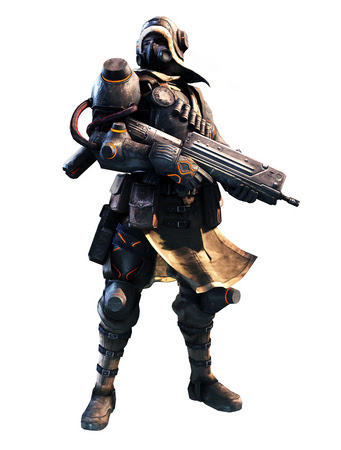 The various factions in Lost Planet are a visually diverse bunch, but a general underlying theme establishes itself: they're all basically scavengers and rummage sale types. The Snow Pirates are generally the most sensible group, with thick parkas and heavy backpacks that use visual cues to indicate the dangers and nature of their profession.

Other groups combine certain sensible aspects with less explainable choices, such as the "Rounders". There's still a generally reasonable aesthetic, but there are a lot of choices that are clearly there to be distinct. This isn't a bad thing - in fact, it's justifiable as an in-universe choice rather than a designer one. These are, after all, vagabonds and mercenaries using cobbled-together gear. It's not entirely implausible that they'd make some choices that "just look cool", or wear clothes that are more stylish than sensible. Even the "Fight Junkies" have the look of Southeast Asian pirates, although the Jungle Pirates' chain obsession is a little bit weird to explain.

One weird thing about the transition from LP1 to LP2 is that in LP1 every person was tailored for the same environment: the cold. In LP2, the increased diversity of the environments means that a bundled-up Snow Pirate can end up in a jungle, and a stripped-down Jungle Pirate can end up in the arctic. This compounds with the Thermal Energy issue mentioned before - everything about LP1 was designed around the concept of "it's cold, survive in the cold", and then LP2 sort of undid that without really thinking it through.

Each character in LP/LP2 is equipped with a wrist computer used to connect to data posts and terminals for things like map information and sensor data. There's a lot of things about them that don't make sense (such as "why do the data posts pop up only when the player uses them? Don't the pirates in this base use them?"), but in general I thought they were a nice tactile touch even if they were abstracted a bit. It's not just "move your guy next to the base and press E", your character in-universe is actually doing something. 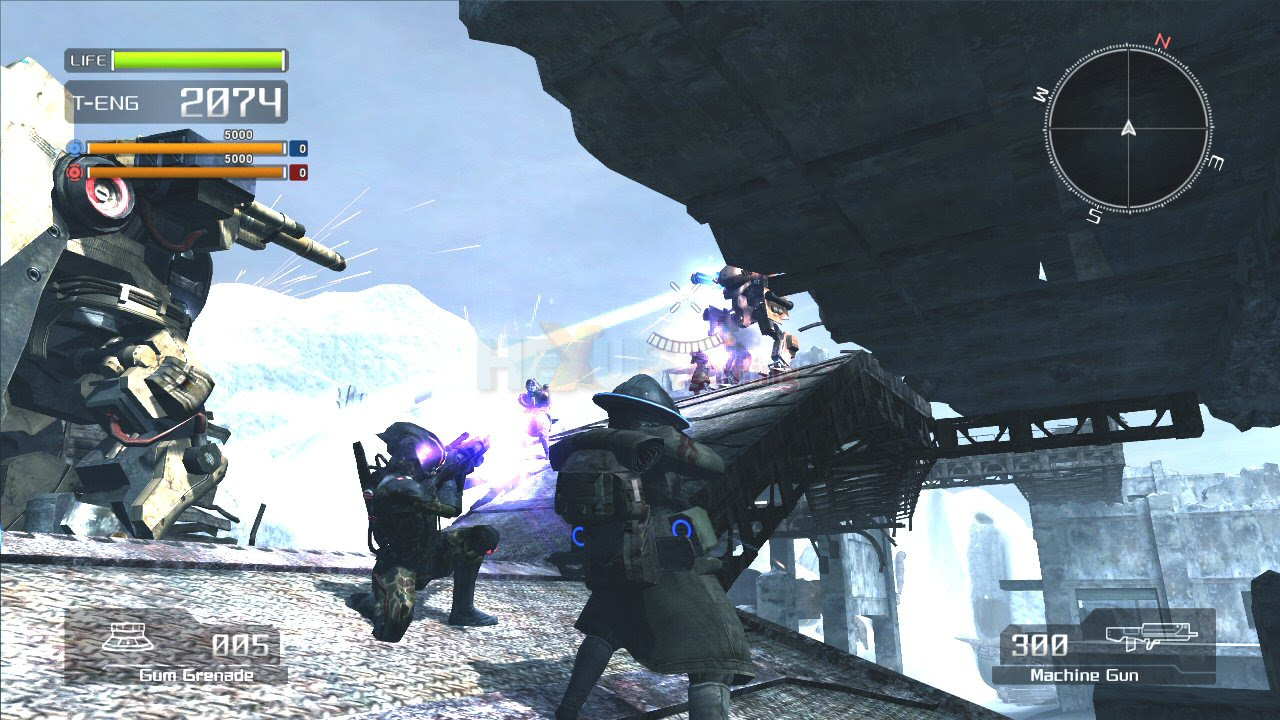 Characters
Each group or faction in Lost Planet is basically meant to be a "post-apocalyptic gang" sort of deal, with the exception of NEVEC (who are PMCs). There's a sense of camaraderie, loyalty, and teamwork, but it lacks the discipline and coordination of actual military units. This is because, well, they're not. They may have combat experience, but they're still bandits, pirates, and survivors, not actual soldiers. They take what works, or what they like, when it comes to outfitting. The only "uniformity" is group-to-group. There's still some chain-of-command, as most groups have some sort of "mission control", but it definitely lacks the stricter organization of an actual military, which also helps to characterize it.

The way casualties are treated is kind of disconnected. It's certainly true that people die in cutscenes all over the place, and most of the units you play as in LP2 talk about severe casualties, but it naturally doesn't count your in-game deaths as being part of that. This is weird considering that your characters in LP2 are basically anonymous anyways, although in certain stages there are recognizable characters even if you don't know who they are.

I felt the character animations in both Lost Planet games helped make them feel more "real" even despite the outlandish sci-fi nature of the game. There's a real sense of momentum when someone throws a grenade or rolls out of the way or whatever. It's a lot of little touches, sure, but when my snow pirate catches his grappling hook on a ledge as he falls, turning his startled slip into a rappel, it just helps make him feel like a person.

The main thing that's lacking in Lost Planet is damage response - the guns are basically a perfect example of "nerf". Bullets impact on the model and explosions knock people around. The Harmonizer is stated to help "regeneration", but it might as well be a shield or something considering what it effectively does. There's really no sense that damage is actually being done until a guy actually dies, at which point they fall over. 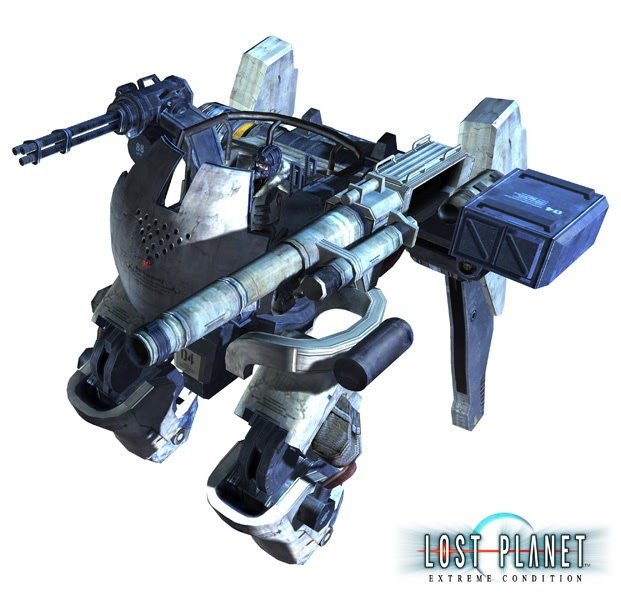 Mechs
The mechs in LP2 are known as "Vital Suits", and they're basically closer to powered armor than full "mechs". Most Vital Suits are basically guns attached to a pair of legs (like a walking tank), but some advanced models include arms and arm-based weapons (like a human-type). Vital Suits are feasible in that they serve basically the same role as infantry due to their relative size. They're smaller than a tank or other armored vehicle, and are able to maneuver in places that armored vehicles wouldn't. They might not be plausible in an engineering sense, but tactically they're at least filling a niche that can't be filled by tanks or jeeps.

Like other parts of the game, there's a lot of little touches to the Vital Suits that I appreciate. For example, weapons can be pulled off and swapped, because they're essentially modular. If you find a VS missile launcher in a shed, you can pick it up, bring it over to your VS, and attach it. If your VS is damaged, you can hop out and repair it. While this is fairly basic and you never really hold onto a VS for that long, it was still a neat "scavenger" touch that helped solidify the aesthetic produced by the rest of the game. 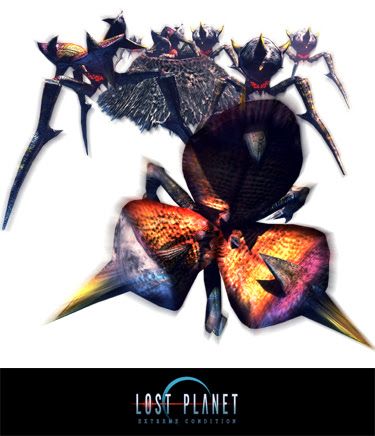 Enemies
The main enemies in the game are Akrids, the native bugs that are naturally full of a glowing orange energy source. This provides a tangible reward for killing enemies - they're full of the juice you need to live. In addition, Akrids, like most bug enemies, are basically innumerable. This means that every trooper can rack up a huge number of bug kills, even if they end up dying in the end. There's different kinds of Akrid, too, so there's a few that are large enough to be bosses or mini-bosses. This diversity establishes them as a threat, but also a threat that occasionally comes in smaller, more easily-killed versions.

The other main enemies in the series are, naturally, hostile humans. In the campaign, the difference between the players and their enemies is justified primarily by the Harmonizers, which convert thermal energy into increased abilities and regeneration. In LP1, only the main character has a Harmonizer. In LP2, the player-character teams have access to a less powerful version of that Harmonizer. The various goons and bandits of the Lost Planet world do not have access to Harmonizers, which means that they die in a few hits.

The reaction to death is kind of weird in general - casualties are acknowledged in cutscenes, but seem too common in gameplay to match up. There's a difference between "we lost four guys" and "our entire forces were wiped out because they refused to retreat or escape". The former is PvP, the latter is PvE. Even when the pirate enemies have superior odds and actually manage to kill the players, the fact that the players can infinitely respawn makes them a roadblock anyways.

Conclusion
Lost Planet is a pretty good "game setting": there's a situation that creates a dynamic, and technology/design that supports the dynamic. It's a post-apocalyptic "cobble together your gear" aspect plus a sci-fi "kill bugs by the thousands" aspect. It's definitely more on the "presentation" side than the "real/plausible" side, but there's a lot of little touches that make the world feel more believable. However, it's also pretty limited - despite the backpacks and ammo pouches, there's no mention of gathering food or water or anything other than T-ENG. It's not exactly a living world, but it's at least a world that's consistent with the gameplay. I'd like to see a sandbox game or a pen-and-paper game that takes place on E.D.N. III, because the arcade/action gameplay of the current LP games don't really use the setting to its full potential.
Posted by J. Shea at 1:19 PM