It's fairly well established at this point that a lot of problems with believability come from a combination of limited sensory information and inaccurate depictions recycled by directors and developers who are themselves learning from false information. I've talked a lot about connecting "real information" to "fictional information" - taking sensory data you know about and connecting it to things that you don't. You might know what it feels like to be cut in the kitchen, but not on a battlefield. However, there is one real-life experience you've probably had that's similar enough to combat for it to be distracting information: 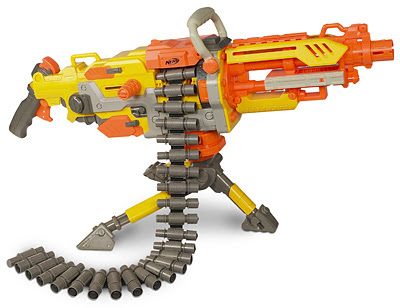 Whether it's specifically Nerf-brand plastic toys, or some other similar "not quite gun" (laser tag, water guns, airsoft, making pyew pyew noises with your mouth), the majority of childhood "combat experiences" are based off of these child-safe devices. The thing about these different play-guns is that while mechanically you might be going through the same "aim gun, pull trigger" routine, the differences make it alien in a way that your brain might not even register later. This comes up in a few different issues:

Tactile
One issue that a lot of gun-based media doesn't really get across is the weight and feel of a gun. An M14 rifle, for example, weighs eleven-and-a-half pounds when loaded. An M16, on the other hand, weighs a mere 8.79 pounds when loaded. A comparable Nerf rifle weighs 2.2 pounds. While newer firearms may be lighter and use a lot of plastic, toy guns leave out the important metal bits for obvious safety reasons (ignoring the whole "operational weapon" thing, getting accidentally hit by a chunk of plastic hurts a lot less than getting accidentally hit by something with metal in it). Looking up youtube videos showing how the gun actually works is a way to get around this; actually owning or shooting a gun is a better way, although this may not always be feasible.

The XM8 in general is an interesting gun because I think it could help to sort of bridge that gap: it's a plastic gun with metal and rubber bits on it, and that seems a lot more tangible than a gun with wooden furniture. It's made up of materials that you've probably dealt with at some point in your life, and that means that you can connect more easily to what it would feel like even if you never hold one in your hands. Of course, it's thick heavy-duty plastic, not flimsy "toy gun" plastic, but that's still something you might have encountered and can remember the feel of. 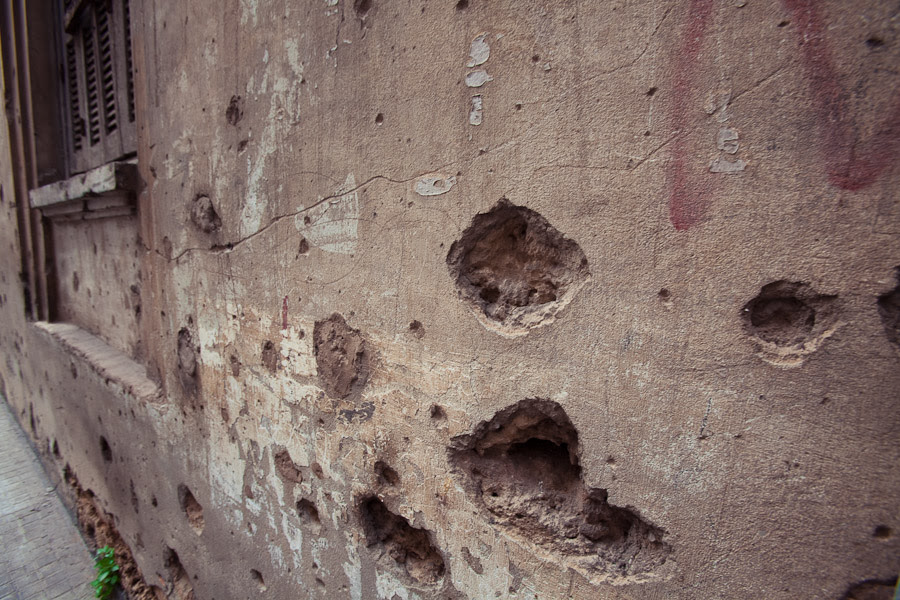 Impact
When children play with plastic guns, someone can be hit a lot, and the only way that it matters is if they know and acknowledge that they've been hit. The only damage is in terms of numbers, based on rules like "you can get hit five times before you're out", or "if you get hit, you have to wait ten seconds to play again". Sound familiar? Video games usually lack all the tactile sensations of being hit or wounded, even as a simulation, but for game reasons they DO enforce "you're hit means you're out". Of course, there are a few exceptions (Red Orchestra springs to mind), but this sort of thing is really the majority. Healing isn't so much recovering from actual injuries as it is restoring your health points, which is basically the same as saying "okay you're back to being able to get hit five times again".

In short, plastic guns and swords and whatever are able to communicate that "you've been hit" but nothing more than that for safety reasons. This is what gets across in video games: object A (the weapon or projectile) hit object B (the target) and now object B takes x damage. Things like "blood" are only really important as a gameplay effect: if someone bleeds, you've hit them, and that's that. Their model doesn't change or anything, it's just a special effect to indicate that your attack has connected. It's like a bullet squib - the bullet hasn't actually entered them, it's just impacted on the surface and caused blood to issue without penetrating their armor, clothes, or skin.

Swords are almost worse in a lot of ways, and it doesn't help that most modern fantasy sword designs look something like this to begin with. A game sword is a nerf bat - there's no actual damage inflicted, it's just that if the weapon connects then the model "takes damage". There's no real sense of momentum. It's even worse when games like World of Warcraft don't even really show the hit connecting - two models just swing at each other and deal damage. There are so many sparkly special effects in the way that you wouldn't be able to tell anyways. Games like Demon's Souls and Mount and Blade do what they can with weight and movement, but the fact that they can't show actual damage means that it's still just "my sword hits your face, you take 10 damage". There's no tearing of flesh or smashing of bones, because that's not possible to model. Even the upcoming Metal Gear Rising just sort of has people fall in half like watermelons or sacks of meat, because they can't effectively model the entire bodily system just so it can be awkwardly hacked up.

Heat and flame are similarly neglected by most media. Explosions in movies and games serve to shove people around. They don't have any heat to them, and they don't throw shrapnel. Flamethrowers in games generally just sort of add a "fire sprite" to people. Like gunfire, the model isn't complex enough to depict the interaction of fire with the human body, so it just sort of gets layered on top of it. Even the heat isn't really conveyed: even as soldiers scream and burn, the standard connection is going to be "slightly warm" and not "blisteringly, destructively hot". This is because you've been around warm things, but you probably haven't stuck your hand in a fire before - and if you have, you've pulled it out quickly, rather than allowing yourself to be constantly exposed to it with no way of extinguishing yourself.

Sound
Plastic guns don't do too much when it comes to noises, and most media doesn't convey how painfully loud real life guns are. If you were watching a movie and the guns were accurate, you'd actually probably turn the sound down. In fact, sound in movies and games is a lot like night in movies and games: if it was actually as loud/dark as it would be in real life or in-universe, we wouldn't be able to hear/see what's going on. In both cases, the audience can actually influence the media anyways (if it's too loud, turn down the volume, and if it's too dark turn up the brightness). A loud or dark environment is oppressive in sensory terms, and part of the issue is that you can't escape it - you just have to find ways to work around it or adapt. The HBO Miniseries "The Pacific" generally had some good scenes where things are properly dark and loud, but the downside is that, like real life, you can't really tell what's going on or who's who. Even promotional shots of those scenes have been cleaned up to be understandable: 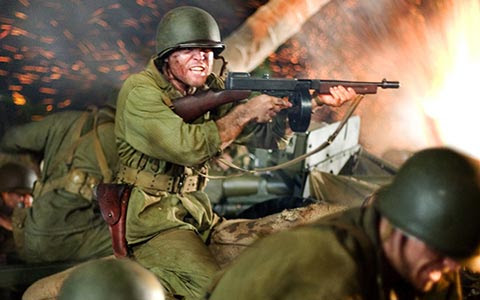 "Fake darkness" can occasionally be averted, if it's a gameplay element to use flashlights or lanterns or what-have-you. However, the sound thing rarely is, because it's something that can cause actual hearing damage. Even if the sound levels were accurate, and voices were drowned out by gunfire and explosions, it's more likely that the player would adjust the sound levels or turn on subtitles instead of "basking in the experience". Even an accurate video can't capture it, for that reason alone. Of course, it's still possible to dramatically underplay gun noises - every gun in Call of Duty: World at War felt like it had a suppressor slapped on it, and don't even get me started on the popguns in Half Life 2. The most basic thing to remember is that a gunshot is basically a very loud crack, not some kind of unique noise. Media tends to try to make up for their inability to depict how loud it is by changing the sound itself, which establishes unrealistic expectations.

So to sum up, there are a lot of ways that movie/game weapons seem more like plastic toys than their real equivalents:

1) Weapons never seem like they weigh enough, or like they're solid enough. The audience is most likely more familiar with light, flimsy plastic/nerf weapons, rather than hard, heavy ones made of metal and wood, and weapons generally behave like props, rather than real machines.
2) Weapons only "impact", rather than "pierce". Therefore, the only important part is whether a projectile or attack hit or not. This is pretty much the same as how Nerf or Airsoft or laser-tag works. This is often justified by technical limitations.
3) The sounds made by toy guns do not compare to the sounds made by real ones, but guns in games sound more like the former than the latter. This may be due to the fact that "real" guns would actually cause hearing damage.

While some of these issues may be simply the nature of media, the "impact" aspect, I believe, could theoretically be fixed by a proper hitbox armor system. That is to say, when steel hits steel, it should act and sound like it. It should be a big deal that you've got a layer of leather or metal or kevlar in between "your character's flesh" and "the enemy's bullet". You shouldn't bleed if a blow glances off your armor. If it doesn't glance off your armor, the armor should reflect this. The armor has to be separate from the flesh, it can't just be "part of the character model".

In fact, one thing I liked about the game Vindictus is that armor could break during fights, but rather than just disappearing it would look battered and ragged and torn up - so it actually looks like your armor has taken damage, rather than simply shattering (as it does in Soul Calibur IV). After one hard boss, the whole group was torn up - and for the first time in a game, I actually thought "Woah, we look like we just got our asses kicked", which I had basically never done in a game before. Of course, the character models were essentially unmarred (though characters with low stamina will huff and puff until they regenerate it), but you take what you can get.
Posted by J. Shea at 8:03 PM

Email ThisBlogThis!Share to TwitterShare to FacebookShare to Pinterest
Labels: senses