Joining the ranks of games like Final Fantasy XI and Lost Planet, the Playstation-exclusive "Killzone" franchise is a setting that's a bit more complex than what gets used for gameplay. It's not much more complex, but it's complex enough to warrant some attention. While on the surface it's Space WW2, with Space Americans fighting Space Nazis using slightly-retooled modern guns, there's at least a bit more depth to it with regards to its story and its universe. 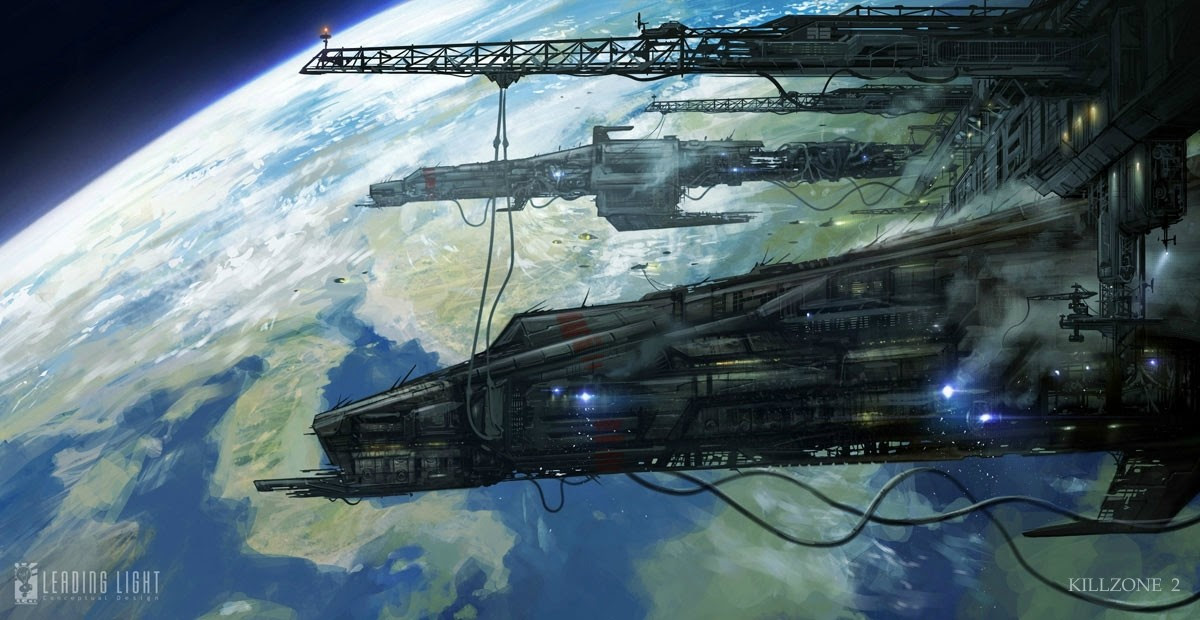 Setting
"Killzone" takes place in a colonial future, where a corporation from Earth spread across the stars to settle the Alpha Centauri system. That corporation was the Helghan corporation, and in Alpha Centauri they found two planets: one viable and fruitful, the other hostile but mineral-rich. The Helghan corporation flourished as they colonized these two planets However, earth's government (the United Colonial Nations) feared that the corporation would secede and become self-reliant rather than going through all the taxes and tithes necessary to ship their goods back to Earth. This resulted in the First Extrasolar War, where the Helghan corporation clashed militarily with the UCN and its local representatives, the Interplanetary Strategic Alliance. The UCN eventually won the conflict and claimed the viable planet of Vekta as its prize, banishing the Helghan corporation's employees and loyalists to the noxious, barren planet, self-named as Helghan.
Despite the horrific conditions of their environment, the Helghast managed to survive through a combination of technology and their bodies adapting to the new environment (though this takes several generations and many colonists die). Embittered and angry at their treatment by the UCN, the Helghast are ripe for the rise of a strong military leader, and that leader comes in the form of the charismatic Visari, who convinces the Helghast that Vekta is their birthright. This is, naturally, where the Nazi comparisons come in - a populace that feels slighted and vengeful against the nations that wronged them rises up under the power of a popular fascist dictator who convinces them to take up arms in the name of their own historical and genetic superiority. While the first game's intro illustrates the nature of their cause, the Helghast are still basically treated like generic Nazi gas-mask enemies. In fact, by the very nature of the game (an action-heavy console FPS), they're always going to be generic Nazi gas-mask enemies. Yet the series has done some things to at least try to make the conflict a bit more grey-on-grey. 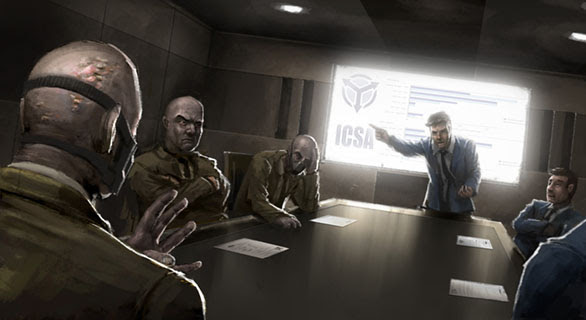 It's not really arguable that the Helghast are, in some respects, bad people. Whatever their reasons, they are in fact a fascist government that is show executing civilians (both Helghast and ISA) without care. They have justifications based on historically poor treatment, but they're not "good" either. Conversely, the ISA takes the "good guy" role by virtue of being the protagonist faction and fighting the gas-masked glowy-eyed space Nazis, but they're more of a neutral corporate entity than anything. In Killzone 1 they're "good" by virtue of defending their planet against a foreign aggressor; in Killzone 2 & 3 they're "good" by virtue of invading an aggressor's planet to deter future invasions.

While the "grey on grey" concept is hardly new or innovative, one thing I appreciate about Killzone is that in a lot of ways it allows the audience to try to empathize with a race who are clearly, blatantly evil. Visari's maniacal, Hitler-like speeches have a charisma to them, as well as actual justifications, that makes the Helghast side believable in the sense that they're a downtrodden, oppressed people striking back at their tormentors while still being amoral, gas-mask-clad murderers who show no mercy to civilians or prisoners. They're evil in the most reasonable, believable way: the sort of evil that justifies its actions as being against acceptable targets. Rather than both sides being totally wrong, the "grey on grey" in Killzone is more about both sides being right, but only from their own self-interested perspectives.

One thing I really liked about the characterization, especially in Killzone 2, was that people could be unpleasant without being your enemy. The main team consists of four people: the player-character Sev, the team leader Rico, the demo expert Natko, and the tech expert Garza. Within this team, Sev and Garza have the most obvious camaraderie, playing off of each other's jokes and connecting on an intellectual level that's hard to get across. It's not particularly intellectual - they're still grunts in a CoD-style game - but they "get" each other, and they're more open with each other. In contrast, Rico and especially Natko are sort of classic meatheads; Rico means well, but doesn't enjoy thinking things through, and Natko's just sort of a dick.

What differentiates Killzone from games like Halo or Gears of War in this regard is that there's some legitimately uncomfortable moments with the latter two; it's not like Baird or Cole from GoW where they have hearts of gold despite being weird, they're legitimately shifty characters without being escalated to "villains". Rico screws up several delicate operations by his ham-handed approach, and Natko at some point makes the subtle escalation from "team jerk" to a fully unpleasant character. Yet they both do their job (well, except when Rico screws up), and they're allowed to be unpleasant without falling into the usual image of an undisciplined, rowdy, hostile soldier. They're not your friends, but they're on your side. 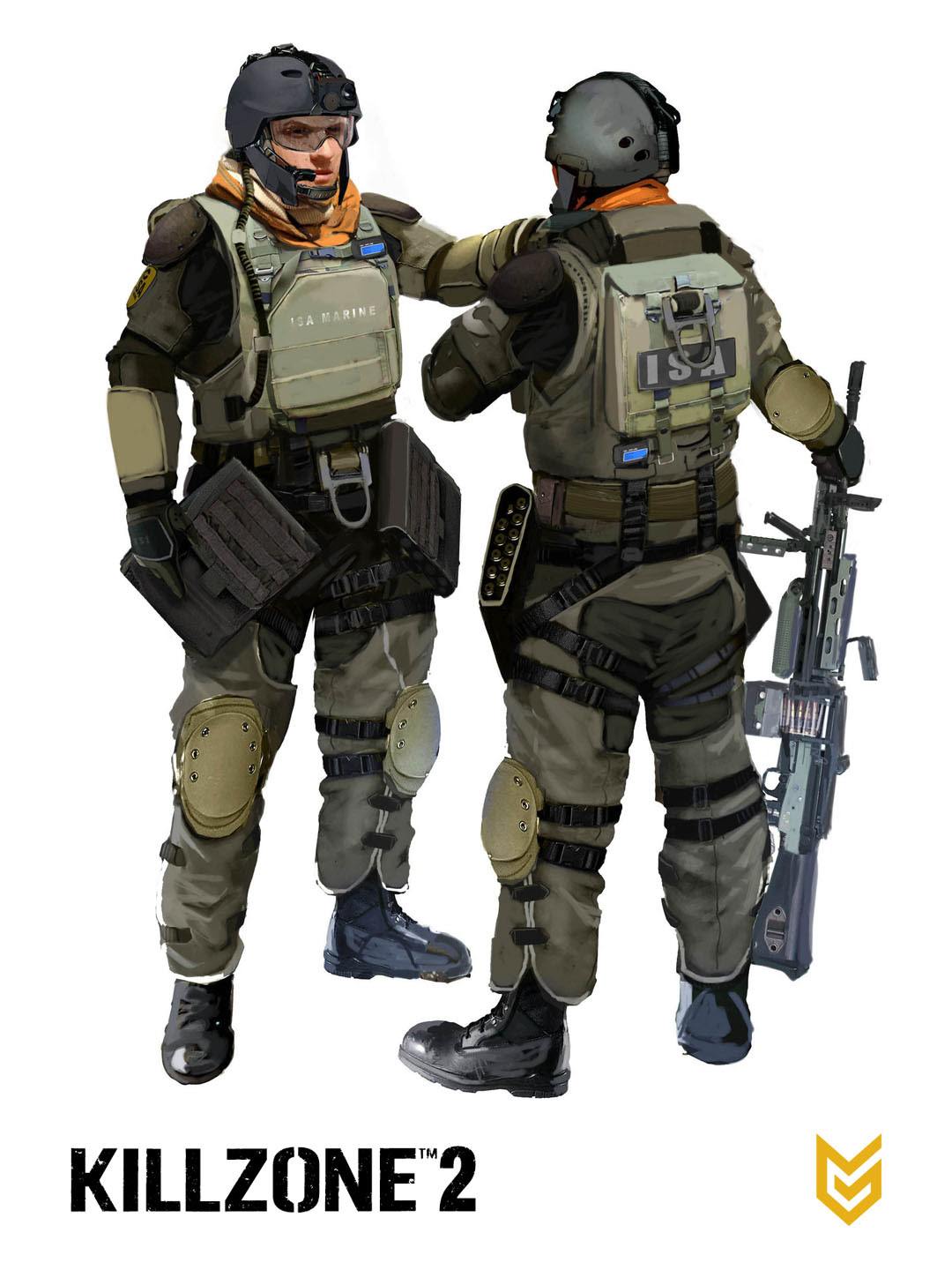 Designs
Killzone belongs to the realm of military sci-fi that, despite being set in a spacefaring future, has people using gear that's basically equivalent to modern-day technology. Unlike most of its contemporaries, almost every gun in Killzone is a slightly modified version of a real gun. Using real guns as a basis has a long and storied tradition in sci-fi, from Aliens to Blade Runner to Star Wars, but in Killzone the modifications are remarkably minor if they're even present. For example, the standard ISA rifle is an LR-300 with the magazine moved to the rear. The ISA shotgun and machine gun are basically untouched versions of the SPAS-12 and M249. The Helghast submachine gun is based on the Bizon SMG, again with almost no changes.

On the one hand, just straight-up taking real gun designs ensures that the guns are, in some way, "realistic": their designs make sense because, well, they're real. On the other hand, having them be exactly real designs detracts from the "sci fi" part of the game. If you know anything about the guns in question (and some of the guns have been used in a lot of games, so you probably do), then it's just sort of weird to see them throw a different name on it and pretend it's different.

The designs in general are pretty solid, but mostly feel like it happened not because it made sense, but because "that's what army guys wear". Both the ISA and Helghast have some sort of glowing instrumentation on them that makes them visible from a distance (orange goggles for Helghast, blue PDAs for ISA). While that's silly from a realistic tactical perspective, it serves its role in the gameplay by adding to the uniformity of the two sides (as pictured). I've talked about uniforms before, and Killzone's designs are a pretty good example of uniforms that are visually similar without being wholly identical.

Gameplay
Before its release, Killzone 1 was one of the many games labeled a "Halo-killer". Regardless of its success in fulfilling that name (it didn't), let's compare the two a bit. One important thing about Halo in terms of believability is that most of the "superhuman" aspects of the player character are justified by his role in the setting. In contrast, Killzone games put you in the role of a Special Forces soldier - above average, certainly, but not superhuman. It's closer to CoD in space than Halo, because it uses modern technology and modern weapons and sort of shrugs off things like "how can he take so many bullets" and "how does his health regenerate" under the pretense of "well, it's a shooter thing".

Killzone's gameplay doesn't really take advantage of the setting; apart from maybe the more exotic weapons, nothing about the gameplay really needs the sci-fi backdrop. If I wanted to look through an EOtech sight and gun down some tangos with my high-speed low-drag assault rifle (RAMIREZ USE SMOKE), I could do so without having to travel several light years to do it. In essence, Killzone's setting makes two obvious games (three, if you count a half-explored aspect of the setting): a colonization game, a ground combat game, and maybe a space combat game if you're feeling generous based on five seconds in the 2nd game's intro.

The colonization game would mostly be about maintaining the health and morale of your population on a blistered, hostile world, and would explore the parts of the setting where a huge number of people had to either adapt to their new environment or die. A strategy game would be a bit more direct, since it's based on modern technology, but would be able to draw upon the wide number of troops, weapons, and vehicles represented in the Killzone universe. The ship game would probably be the most questionable, since other than "ships shoot missiles" the fleets in Killzone don't get much attention.

I guess the hypothetical problem with those three game types is that they illustrate a shallowness in the franchise; because of all its reused technology, Killzone doesn't have much to set itself apart other than the noxious conditions of Helghan and its mask-clad denizens. This brings up the further questions of why the setting was developed in the first place; was it just meant to be a sort of sci-fi filler game and it just got out of hand?

Conclusion
The question I have about Killzone is "why?"; I'm curious to know why, exactly, someone wrote up all that background for a game that barely cared about it. When someone made the picture of Helghast and ISA representatives at the bargaining table, and when someone else wrote some text background to accompany it, were they really being used correctly? Maybe it's just there to build up the franchise; maybe the veneer of depth gives it more credibility. Even if the series did branch out, I suspect it would be a scenario similar to Halo's own genre explorations "Halo Wars" and "Halo: ODST" - which is to say, they don't take it any more seriously than the main game does. Whatever the end result is, it's just sort of puzzling.
Posted by J. Shea at 8:41 PM 1 comment: