In real life, nothing exists in a vacuum. Every conceivable technological, societal, or cultural advancement is the result of an intricate web of motivation. The changes create an aggregate picture that reflects the huge number of influences that a given advancement has had. Language is a huge example of this: the evolution, introduction, and meaning of words has been ongoing since before it was Latin. While the actual source of the words and grammar may not be known, the changes from "Latin" and "Norse" to "Old English" to "Modern English" (not to mention all the other influences along the way) can be tracked and explained.

Military development is largely the same thing: a combination of available resources, known designs, and the necessity of countering enemy technology or natural problems. Everything from high-level naval warfare to low-level infantry combat can be connected to these basic concepts. By reinforcing things that work and eliminating things that don't, generals can expect better results. In addition, they may have to change their assessment of what "works" and "doesn't work" as new situations develop. Even World War 1, long treated by media as a sort of unending, pointless slog, shows a huge number of technological advancements once generals realized they had to cope with the developing situation: open warfare turned into trench warfare out of necessity, and the nature of trench warfare led to new tactics like assault teams and tanks to cope with it.

Video games cut out the "R&D" part of escalating development. They may have the ability to "unlock" upgrades and so on in the form of "research", but there's no actual research being done. It's just "spend x points to unlock the next part of the tech tree". The only tools the player can use are the tools given to them by the game makers. There's almost certainly a balance to the gameplay, and a way to counter certain enemy types, but there's no actual development to it. This is why balance in games is a concern - because the development teams basically control the world, and the players have few ways to actually change things themselves. 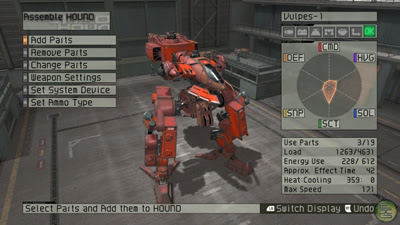 This isn't always the case: in the mech game Chromehounds, players are given the option to build a mech from various components and parts. This is intended to result in a wide range of mechs based on player choices and designs. However, the very nature of the game means that some mechs are going to be better than others - it's not perfectly balanced, so there are going to be "good designs" and "bad designs". As the community explored different options, they gradually discovered what designs are the most effective and which are the least effective. This culminated in the development of certain designs, such as the "twig legs" and "double doubles", that were far superior to most possible builds based on the exploitation of weight ratios, armament loads, and other factors.

In real life, this would be considered incredible, and the designers would be lauded for their outstanding designs. In the game, people who use such mechs are considered to be "too serious" and make the game "not fun"; there are plenty of complaints from people who just want to make a mech that they like and jump into the game without being overwhelmed by "unfair" designs. To them, these optimized designs make the game less balanced, and thus less enjoyable for people who want to customize and experiment with their own mechs. 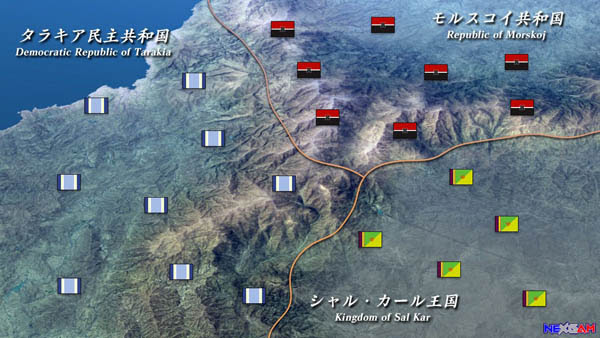 The difference between these two concepts is simple: wars are fought to be won, and games are played to be enjoyed. In a war, it would seem foolish - even insane - to let the enemy regroup for reasons of sport. Yes, there are rules of fair play (don't shoot medics, etc.), but these are used because both sides suffer if they're ignored. There's no "fairness", there's just a need to win and get it over with. A game, on the other hand, is played for the game itself. If one side was dominating too much, the game would be over. It may be fun to win, but for the most part it is the journey that's enjoyable, not the destination. In Chromehounds, there's a multiplayer mode where players join nations and fight for territory (as seen above). The map resets either when one side has beaten both others, or after two months. This allows for some long-term developments, but still sets a clear message: even if you win, the war has to go on.

The train of thought regarding game balance is something like this:
---
We've included 3 classes in our new game. One of the classes is overpowered and another is underpowered. Therefore, people are using one class more frequently and another less frequently, if at all. In response, we should re-balance the game so that the classes are equally powerful in different ways so that people can use all the classes and not be discouraged by unfair gameplay.

In real-life development, it's something more like this:
---
We've built 3 kinds of tanks. One of the tanks is far superior to the other two, and one of the tanks is worse in a lot of ways that aren't justified by its resource cost. Therefore, we should stop building the bad tank and make more of the tanks that aren't awful, unless the military-industrial complex is involved. Repeat as needed when new information comes in about enemy tanks and tactics.

Of course, this isn't absolute. There are plenty of examples of flawed tanks because of the perception that they were getting the job done. However, there's also examples of adaptation and new designs, such as the up-gunned Sherman Firefly and the Soviet IS-2. If things are unfair (as they often are in real life) then the choices are either adapt or die. The former keeps the fight going until one side can't keep up, and the latter ends it.

Games, on the other hand, are designed so that the game can keep going. Actually "winning" a game is impossible, and the necessities of game balance make actual exploration of new tactics unattainable except in the most niche games. No matter how far down the tech tree you get, when you start a new game you're going to be way back at the top again, because otherwise the game's going to run out of content and you're not going to be able to play it anymore. Is it possible to do something about this? Perhaps. But it would most likely require something of Dwarf Fortress proportions: a physics system build from the ground up and covering every conceivable element, with long-standing concerns of resources, supply, and practicality.
Posted by J. Shea at 6:35 PM