Combat is a major aspect of media. Games bear the brunt of combat-related events, but films and books have their fair share of it. In some cases, combat is reasonably non-lethal (based on unarmed melee combat or something similar), but in the majority of cases, combat is meant to be lethal, either by guns, swords, or magic spells. Injury and death are two very different things. Injury can be healed or recovered from - death cannot. Death is a lesson that cannot be repeated; if a character dies, then they are done.

This is a topic I've covered before, but that was largely based on a concept of avoiding death through different actions. Today, I'd like to talk about reactions to death, or how it's depicted within the universe. There's two major concepts I'd like to establish: "Risk" and "Fear".

Fear refers to a character's reaction to the potential of dying. A character who is doing everything he or she can do in order to avoid death has high fear. A character who quips and snarks in the middle of combat and clearly doesn't give a damn has low fear. Fear is important because it is an aspect of their characterization - if the character feels like he or she is going to die, then the audience should become drawn in. A lack of fear can be seen either as being "badass" (i.e. they don't care if they die) or "irreverent" (i.e. they know they're not going to die) depending on how it's handled. Fear can best be described as the in-universe aspect of character death. 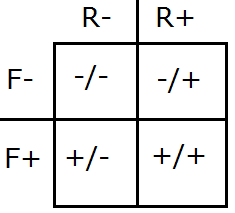 So with those concepts established, let's take a look at this chart I whipped up. "F" and "R" represent fear and risk, respectively, and "-" and "+" refer to an absence or presence of that element. The interaction of these elements can affect the audience's understanding of a character and their condition. Low amounts of either of these elements can result in something being "cartoony" or "rule of cool", while higher amounts makes a work more "serious" (as in, "something that should be taken seriously").

No Fear, No Risk (-/-): This is a character who is immune to everything and they know it. This is the standard "snarky protagonist" who beats up every enemy soldier without a second thought. There's no drama, just a visceral "awesome" feeling from watching a guy be objectively superior to everyone they encounter. The Star Wars prequels were overloaded with this, culminating in Episode 3 when an entire elevator full of battle droids holding Obi-Wan and Anakin at gunpoint were sliced through without even a brief pause for peril or danger. Many people will defend this aspect as being "rule of cool" or some similar concept, but there's absolutely no room for drama here - it's a dolled-up version of shooting fish in a barrel, and its only value is as some sort of revenge or power fantasy.

No Fear, Risk (-/+): This is a scenario where a character is technically in danger, but continues to quip and snark nonetheless, or charges out into the open with both guns blazing. In a fairly balanced game, this character is either lucky or dead. In a non-interactive medium, their death will generally either be a comical waste or a dramatic reveal. "Risk" naturally, can come in several forms - from sudden death in combat to "cursing the author for totally killing that dude off" - but the end result is the same: a disconnect between what's happening and how the individual treats it.

I should clarify that when I say "no fear" I mean that there is no acknowledgment of the risk of death. The individual proceeds as though combat was a game, and they're generally surprised if they're severely hurt (as is the audience, more often than not). A character who acknowledges the threat of death but chooses to ignore it is not the same as a character who treats death as something that "happens to other people".

Fear, No Risk (+/-): This sort of character can be a coward, a self-preservationist, or perhaps even a grimly determined soldier - but they're also not in any danger, regardless of their response to the situation. This is a difficult one to judge; on the one hand, they're displaying believable responses towards combat and the risks it entails, but on the other hand they're not going to be exposed to it for meta-reasons. They might be a protagonist, a title character, or a viewpoint character - for whatever reason, it's obvious they're just not going to die. However, depending on how the situation is handled, a "Fear, No Risk" character can suggest at the possibility of that death happening anyways. In addition, the character in such a case doesn't know that they're not going to die, so maintaining the illusion of risk can be a major factor in whether something is plausible or not.

On the other hand, "Fear, No Risk" can also lead to melodrama if there is a gameplay/story (or action scene/story) mismatch. A character who takes a billion hits in gameplay can be afraid of a man with a pistol in a cutscene. This creates a sense of false drama, where what should be a trivial obstacle is made into a dramatic issue because they're ignoring the thousands of wounds the character has already shrugged off.

Fear, Risk (+/+): The most believable combination, with a match-up of character risk and character reaction. These are characters who could die at any moment and who know it. Their reactions may vary, from cowardice to resignation to defiance, but the drama of the series comes from not only their reactions to a perilous situation, but also the fact that it could actually happen and they're not arbitrarily protected by the plot. Therefore, their sacrifice (though still fictional) has much more emotional attachment to it. Their reactions are made more poignant because, for them, the risk is present and plausible.

Now let's take these concepts and apply them to some existing franchises.

Warhammer 40,000: Because of the grand scale of the setting, all four points are touched upon. "No Risk" is generally reserved for protagonists and book characters (like the main characters of Dawn of War 2), while "No Fear" is generally much more ubiquitous, applying to a broader group. It's probably best to look at it faction-by-faction:
Necrons: No Fear, No Risk. The Necrons have no real humanizing elements to them - they're an unstoppable force that can briefly be delayed, but never fully countered. They're not meant to be sympathetic, they're meant to be boogeymen. The same can be applied to the Tyranids, who may suffer defeats, but whose hivemind status means that the loss of individuals is unimportant.
Orks: No Fear, Risk. Not a huge amount of risk, mind you, but an ork can still die. Orks also happen to lack any fear of death as a racial trait, so while they might get shot or blown up, they don't really care. This is why they're the "comedy race": because they're operating under the same combat rules as everyone else, but the consequences don't matter to them.
Space Marines: Varies. The Space Marines are among the most schizophrenic factions due to their varying levels of power. Protagonist Space Marines are generally "no fear, no risk", while lower-level space marines are "no fear, risk". I pointed out DoW2 because that gap exists: the main characters can be resurrected, but the helmeted generic space marines that serve as their squad members are just sort of left where they die.
Imperial Guard: Fear, Risk. The IG are the "normal human" faction, and as such have the most human response. The IG are thrown into countless unwinnable battles, and their soldiers know it. Thus, the IG are the most "serious" faction, because there is consequence to their decisions and actions. This is in contrast to the Orks, who are more physically powerful and also do not care about losing. A few special characters might fall under "no risk", but the average guardsman is definitely expendable and aware of it.

Berserk: Berserk is a grim, bloody manga - but it still manages to have a cast of characters who are largely immune to death (though they can still be harmed). Therefore, it is "Fear, No Risk" for the protagonists (at best) and "Fear, Risk" for everyone else. Soldiers are slaughtered en masse by monsters or demons or each other, but while the main characters can be pushed to their limits, it's pretty clear that none of them are going to die off unless it's in a major climactic scene. Still, one thing I appreciate about Berserk is that it manages to make the soldiers' deaths horrific and disgusting enough that the "risk" and "fear" are both warranted.

Dragon Age: Dragon Age would like to be "Fear, Risk" judging by the focus on mature concepts and themes - blood, betrayal, death, foul sorceries, and so on. However, it comes out as "No Fear, No Risk" because the game centers on a team of protagonists who can't be killed outside of very specific player choices (no risk) and have conversations like this or like this (no fear). The snarky quips prevent any feeling of trepidation or fear, and never forces players to leave their comfort zones. In exchange, the game offers us romance subplots straight out of a Joss Whedon flick. It's almost impossible for me to take it seriously, because the "seriousness" of the setting primarily comes from blood and gore, not from any real logical framework. Most of this analysis applies to Mass Effect as well, with the semi-exception of the final mission of ME2 (a partial-Fear, partial-Risk situation).

Metal Gear Solid: While MGS generally maintains an action movie mentality, MGS4 features a lot more of Snake getting hurt and mutilated by things in an attempt to gain sympathy for his character. This creates a "Fear, No Risk" situation: he gets shot a million times in gameplay and barely cares, but then he gets stabbed in a cutscene and "oh no he's hurt badly what do we do". The characters try to act like things are super-serious, but the fact that you can heal up in gameplay by eating a ration sort of undoes the pathos of the situation. The guards, on the other hand, are "No Fear, Risk" - they can die easily, but with the exception of the militia in MGS4, they'll charge at you despite the odds. You can blame mind control and nanomachines for this, but you'd think they'd at least try to regroup or reorganize or something instead of continually charging at the guy who's mowing them all down.

Bleach: The ratio of "people looking shocked at some major wound" to "good-guy deaths" is currently hovering somewhere around 500,000 to none, so Bleach is a pretty solid "Fear, No Risk" situation. This does not apply to the main character, Ichigo, who doesn't really care about the potential for dying, and thus is solidly in the "No Fear, No Risk" category. This is meant to make him seem more powerful and courageous. Whether or not it works is arguable.