The Lie Of Fiction, And Morality In Games

I've written a lot about "believability" in the last two years, and for a lot of different reasons: equal representation, immersion, mechanical variability, even the possibility of using interactive mediums for educational purposes. While I've written about a lot of different aspects of "believability" and what it means, there's one major thing that I feel is still important to address: the base concept. I'll put this as directly as possible.

These three statements are the foundation of why "believability" as a concept is important. It's why we care about "canon" or why we get invested in characters or why we get upset when things are "spoiled" or "ruined". Fiction is a lie, but it's a lie we care about. People can make up any story they want about Star Wars, inventing their own arcs and characters as they go along, but they still got upset when Lucas "ruined everything". Sure, Lucas' stuff had the special effects budget and all, but it's not more "real" than your version - it just has a bigger budget. Individual "fanons" or "headcanons" are just as real as Lucas' canon, in the sense that they're all lies that have been made up. And yet people get angry, because that's how the lie works: your brain sees it as a form of reality.

All the reasons we care about stories - all the pathos and drama and emotion - are related to the fact that at some level our brains treat these stories as being "not stories". In many cases this manifests in subconscious reactions, which is something I've emphasized in the past with regards to design. Things like realistic armor and weapons can make the impact of combat feel more "real" and therefore more dangerous, whereas cartoony designs make it feel less so. Tricking people's brains into accepting a false reality has many different facets - the way people behave, the way things develop, the way objects feel and look. Heck, it was about 90% of RedLetterMedia's review of Star Wars. People don't care about accuracy and consistency for no reason, they care about it because it's part of the emotional evocation process.

Let's take this in a different direction: "why do we care about villainy". People often defend doing bad things in games (or drawing pleasure from bad things in movies) because it doesn't hurt anyone. That's true. The ones and zeroes that have been assembled into "characters" are programmed to say things like "ow" and "stop it" when you attack them, but there's no consciousness there. Or, in a movie, the actor/actress is told to scream and cry, but they're not really being hurt. It's the simulation of pain and suffering, yes, but really there's nothing going on.

But then why do people enjoy it?


The simplest answer is that even though we know it's false, the simulacra of life are there to convince our brains that on some level it isn't. This is why we put so much effort into creating "humans" in games who scream and bleed even though the same job could be done by silent, untextured models like these guys. The reason we bother making the lie of fiction convincing is because that's how it hooks up to our brain and produces all those feelings and emotions. We know we can't be hurt by a work of fiction, yet there's an entire genre of games and movies designed to provoke horror and fear. We know fictional characters aren't real, yet works of fiction constantly attempt (and often succeed) to make us care about the characters and what happens to them.

The duality of cruelty is that even though "it's not real" is invoked as a defense, if it was OVERTLY "not real" people wouldn't care about it as much. The simulation of cruelty and dominance and power is what gets people excited because it's plugging into a primal part of masculine identity. Masculinity wants to be stronger, it wants to be better, it wants more influence. The defining trait of masculinity is competitiveness and a desire for superiority; this is the core of "power fantasy" as a concept, and why works that play into that concept are so commonplace. People want to be Indiana Jones or James Bond or Batman not because they think it would be interesting and nuanced to be an archaeologist or a spy or a vigilante, they want to be those people because they KICK ASS and everyone thinks they're awesome. That's why they're "escapist": because in a competitive masculine-structured society, the greatest escape is being better than everyone else and not having to put up with their shit. 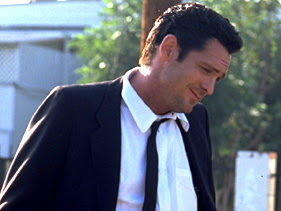 In Reservoir Dogs, one of the most memorable characters (in an admittedly small lineup) is Mr. Blonde. Mr. Blonde is in some ways the epitome of "power fantasy" and in other ways he's not. Most people were disgusted by Mr. Blonde's horrendous behavior, as was ostensibly intended. This includes Michael Madsen, the actor who played him, who almost couldn't complete this scene after the cop ad-libbed the line about having a family. It was so upsetting to him that even though he knew it was fake and nobody was getting hurt, he was still emotionally moved to the point that he almost couldn't continue the scene:

I dunno, you play somebody who’s psychopathic or who’s violent, you try to draw the line somewhere. I mean, I don’t really believe in killing children or women! You have to be…playing a bad guy’s one thing, but turning it too far in the wrong direction doesn’t make me happy. [src]

And yet there's plenty of people who see Mr. Blonde as the apex of masculinity, with good reason: he's calm, he's in control, he holds power over others. While everyone else is freaking out, Mr. Blonde is as cool as a cucumber, and isn't disgusted by things that normal people would be. By the standards of power fantasy, Mr. Blonde is the coolest dude ever. The fact that he's immoral might turn away some, but for others it makes him all the more enticing - he doesn't even give a shit what anyone thinks of him. He is a badass. And yet all the things that make him "badass" are supposed to be part of his depiction as a morally repugnant piece of shit.

Would Michael Madsen play Mr. Blonde for fun? If there was a Mr. Blonde simulator, would Michael Madsen enjoy playing it just to enjoy himself (as opposed to "for purposes of telling a story")? Most likely he wouldn't. He states that "playing a bad guy's one thing", which suggests that the reason he's normally okay with it is BECAUSE he's certain that the character is being represented as a repugnant villain and not a good guy. Yet even despite this, despite knowing that this character would be hated and despised, he still almost couldn't stand it. Madsen played the role because it was part of the story, but he found the character to be repugnant - he didn't consider playing the role "escapist".

What's interesting to me is that his logic is almost the opposite of the earlier statement of cruelty in games being okay. Madsen justifies playing a bad guy BECAUSE it is a "bad guy"; not because it's fun or cool, but because he thinks it's important that characters like this are shown to be awful, villainous people. By contrast, the "cruelty is okay" logic suggests that you can do whatever you want to do in fiction without being criticized for it, no matter what sort of acts you're emulating or carrying out or how it's depicted. As long as you don't do it in real life, nobody's allowed to criticize you. Yet Madsen is disgusted by these actions even when he knows it's not real, because instead of being kept separate from reality, it acts as a mirror for it. 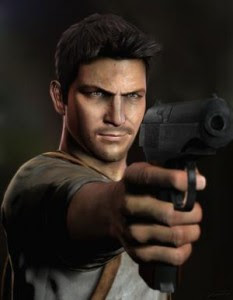 Games and movies are allowed to depict awful things because they're not real and nobody's getting hurt, but at the same time there's still a level of "expected response". James Bond in the 1960s was an overt misogynist who would kiss women against their will; that wouldn't fly today, and it'd seem creepy and weird to most audiences. A game that allowed the player to do the same without consequence would seem pretty suspect, too. Yet there's plenty of games and movies where murdering hundreds of people - justifiably or otherwise - is treated as being normal and expected, and doesn't compromise the moral integrity of the murderer. Wei Shen still gets to be a cool undercover cop in Sleeping Dogs even when he's driving at 75mph down the sidewalk. Nobody calls him out on being a sociopath. Nathan Drake gets to quip and snark after every kill (and enemies eagerly continue to charge directly at him rather than running away), and he's still clearly meant to be likable. Two of the only protagonists that are actually treated like awful people for doing these sorts of things are Kane and Lynch, and their game received an overall negative response largely because of that characterization.

Do violent video games cause people to murder in real life? I don't think so. I don't think they CAUSE it. Are they RELATED? Sure. The same desires fuel both fake-murder and real-murder; desire for power, for supremacy, for apex masculinity. Obviously it's better to have fake-murder than real-murder, but that misses out on an important issue, which is that there are ways for people to be absolute pieces of shit without actually killing people. Maybe video games don't cause real-life violence. Do they factor into harassment, or misogyny, or rape threats? Does the culture that thrives on the victory of the strong over the weak - of the badass motherfucker over the pussy faggot - REALLY have nothing to do with these things? When people are saying things like "sexism is integral to the fighting game community", or physically threatening people who criticize their culture, or taking films like Red Dawn and Olympus Has Fallen to heart...is this completely unrelated to the violent media that these cultures are centering around?

Ask yourself this: what separates a game or a movie from propaganda? Does anything? Would you care so much about "being badass" if it hadn't been rigorously established as an ideal by the culture you've been immersed in since your birth? As much as people are willing to give leeway to people's morality in the past, they sure don't apply much thought to it in the present. Nothing's changed. You're still a product of your culture, if you allow yourself to be. Question why you think these things are acceptable.