Keep It Simple, Stupid:
A Concise Analysis of Metal Gear Solid 4: Guns of the Patriots

SCENARIO
The setting of Metal Gear Solid 4 depicts a world where the battlefield is under total control, and war is a commodity. The income gained by war serves as a major pillar of the First World Economy, with even countries like the US and Great Britain being largely dependent on it. Wars are fought not for ideology or nationalism or even ethnicity, but instead are simply ordered by private companies to continue a string of proxy conflicts and keep the so-called "war economy" rolling. Nanomachines are used to connect soldiers to a control network, preventing them from experiencing fear, doubt, remorse or even pain, and essentially turning the entire experience into a video game. This entire arrangement is the master plan of an AI system known as "The Patriots", which plans to control society through automated censorship and control.

The concept is explained in further detail in this briefing.

There are several glaring issues with this scenario.

Firstly, despite the ostensible nature of warfare in the MGS4 world, the conflicts seen in the game (an ethnic conflict in the Middle East, a governmental clash in South America, and a rebellion in Eastern Europe) are all based on classical grounds rather than being two PMCs fighting for no other reason than "they were told to". Despite the opening narration focusing on how meaningless and purposeless these wars are, every war depicted in the game has a "classic" reason for it, of the kind that is supposed to be obsolete. This is not only problematic in its own right, but also connects to the other two issues.

Secondly, the "War Economy" exists apparently just to connect the entire first world population to warmongering. Rather than simply saying "the military-industrial complex is intentionally starting wars for their own profit" or something along those lines, the game suggests that the entire first world is wholly dependent on war as a factor for economics. This concept violates the basic tenets of the Broken Window Fallacy. In short, "war as a business" only controls the entire economy if there is enough money coming into make up for everything else being spent on war. In our existing economy, private contractors are paid by governments. The question is "who is buying the services of these PMCs, and where are they getting the money and/or resources to do so?" While mercenary service can boost one country's economy (Switzerland managed to pull this off in the Renaissance), the idea of suspending the entire first world economy on income from the third world seems suspect.

Thirdly - and this is something brought up in both MGS4 and Metal Gear Rising - the relation between this state of affairs and the plans of the Patriot AI System are extremely unclear. In MGS2 the goal of the Patriots is to censor and control world politics, keeping them as docile and controlled as possible. Despite this, MGS4 depicts a war erupting into constant warfare (again, not just proxy wars but actual civil wars and conflicts). In both MGS4 and MGR, the characters simply conclude that the Patriots AIs must have gone "off the rails" from their creators' original intentions. To me, this isn't enough to justify a totally inexplicable state of affairs, especially when those same AIs had a clear (and contradictory) plan in MGS2. 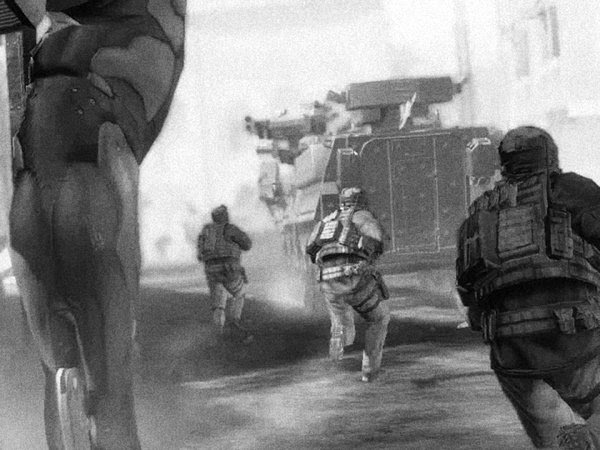 ALTERNATIVES
To be perfectly fair there are plenty of neat and interesting things about MGS4, especially in a sci-fi "what if" sense. For example, in MGS4 the rise of private armies means that sleek corporate advertising and appeals to thrillseeking (or escaping from poverty) have replaced duty and patriotism as the primary motivators for recruitment. This, almost unbelievably, serves as actual commentary on the practices used by actual recruiters today, as well as a critical look at an amoral corporate culture.

This scenario could be further compounded by the SOP system, which releases chemicals into the bloodstream that control emotions like fear and remorse, and reward soldiers for killing enemy combatants. In essence, the "thrill" of war is sharply increased, serving as an outlet for a huge amount of masculine cultural output - again, a point where commentary on society could quite easily have been made. The SOP system essentially turns war into a videogame, a metaphor made repeatedly during the course of MGS4 but never really acted upon despite numerous opportunities. We never see the world through the eyes of the PMCs, or talk to them as people. Instead, they are video game enemies just like every other set of video game enemies, with no characterization or humanization. Even a scene as simple as seeing unmasked PMCs relaxing in a camp (perhaps playing video games in their spare time?) could have helped with this. Instead, there is nothing.

Even the basic idea of SOP "makes sense" from a story perspective - after all, the Patriots want to control everything, and exercising complete control over the US Army (down to the individual soldier) makes complete sense. However, it mostly comes into conflict with the existence and proliferation of PMCs, which is also part of their plan despite running entirely contradictory to it. The idea of controlling PMCs with the System makes sense, since it would serve as a failsafe, but the necessity of the PMCs does not.

I'm sure there are many individual keen to say that they felt MGS4 was incredibly moving and emotional, but before those people show up I'd like to note something. The second aspect - the idea of learning from MGS4's setting - isn't some sideshow. It's not some strawman I'm setting up in order to make gamers look like uneducated nerds eager to grasp at any signs of legitimacy.  A huge number of reviewers and gamers thought that MGS4 was legitimately insightful, in most cases because they didn't know that much about PMCs themselves. Like SpecOps, MGS4 represents a false savior for many - it failed to teach them reality, but convinced them that they knew what reality was. I think this represents more clearly than anything why I am so leery of the idea of games being treated like art, and the sort of community that endorses it while stifling criticism and analysis.
Posted by J. Shea at 4:52 PM