In the last article I talked about the difference between style and utility when designing characters, with the general idea that the majority of combatants are going to prefer the latter while still including elements of the former when they don't interfere significantly with it. However, it's also true that there are situations where "utility" isn't quite as important as it usually is, as illustrated by the examples involving Japanese culture I provided. So let's give the other side a bit of a fair shake and look at two examples where winning, or even surviving, isn't everything. 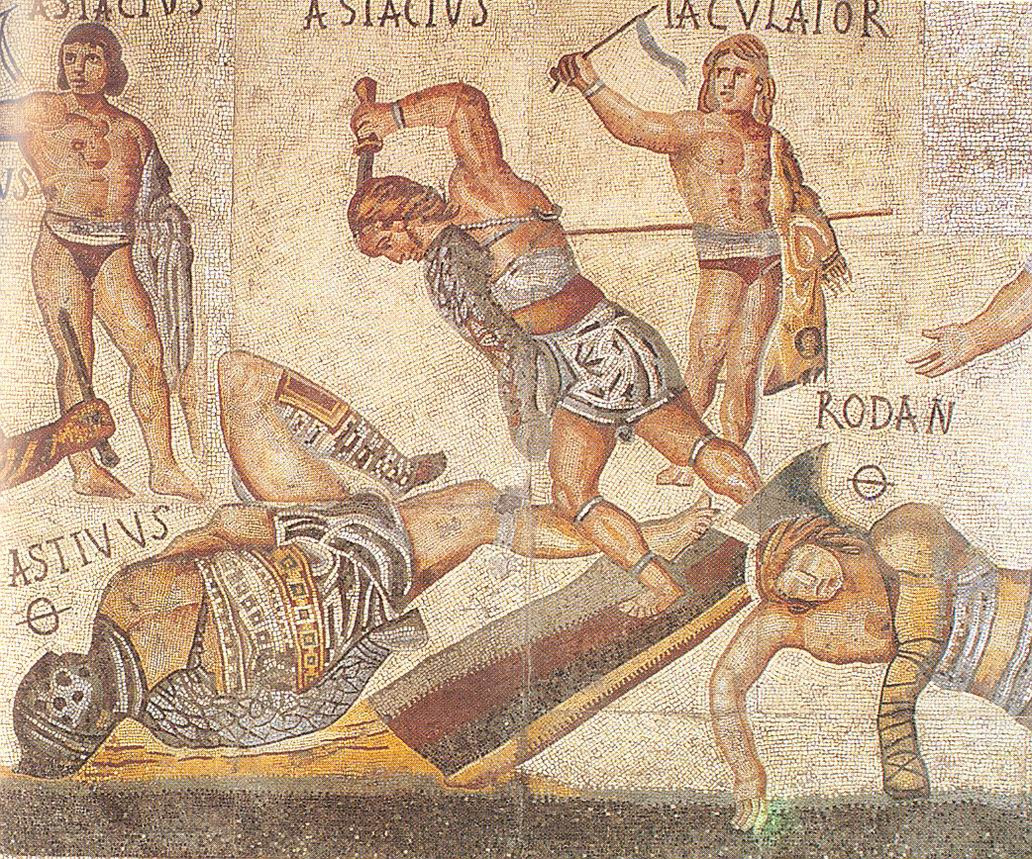 Gladiators & Arena Fighters
Whether in the Coliseum in Rome, in a provincial arena, or even as part of a travelling show, the gladiator is the prime example of "combat as a spectacle" in history. As such, gladiators fulfill a special role when discussing utility and style, which is that they (or more likely their handlers) cared very deeply about both, and couldn't usually sacrifice either of those aspects. A poorly armored and equipped gladiator won't last long enough to make the fight good, but a boringly armored fighter is no fun to watch for the crowds - and they're the people you've got to keep happy, because it's entertainment.

One example of this is found in the different "classes" of gladiator. A gladiator's class or type was determined by the weapons they used, the armor they wore, and the tactics they adopted. They presented a sort of pre-packaged, easily communicable concept for fight advertisement. If a fight was going to be between a velites and a thraecis, the average spectator knew what they were going to get. Certain classes were commonly paired against each other based on how exciting it was to watch them fight. Classes ranged from common sword-and-shield fighters like the secutor and the murmillo (who were distinguished primarily by the shape of their helmets) to more exotic styles like the net-and-trident-wielding retarius, or the enigmatic scissor, who apparently fought with an arm-encasing steel attachment. 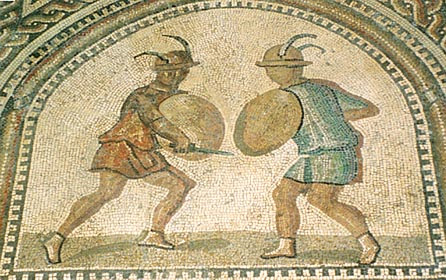 As mentioned, gladiators were a necessary cross between style and substance. In many cases a gladiator would be armored only in areas where it was actually likely to be lethal, so that there could be exciting, blood-drawing cuts on less vital areas like the arms or flanks. Helmets were almost always used because of the lethality of a head hit, and to balance the sort of "boring anonymity" a helmet provides, the helmets would be given interesting and recognizable shapes. This was compounded with heraldry emblazoned upon shields, so that their bearers could be recognized even in their armor. All these things, while part of the "style" aspect of the equation, are also utilitarian: the purpose of a gladiator was to draw a crowd and to become popular, not just to win. As such, a gladiator's costume was designed to be exciting and enticing as well as protective.

Interestingly, the idea of gladiator combat as a to-the-death bloodsport was not always true. For a brief period after Emperor Augustus took power, it was actually illegal for fights to be "to the death", and combat involving edged weapons became fairly rare. During that period, "gladiator" was about as hazardous a profession as boxer or professional wrestler. There was definitely pain, crushing impacts, and the risk of serious concussions or broken bones, but those are byproducts of a show, rather than the goal. It totally changes the dynamic of the event in terms of win/loss relationships as well, since "losing" doesn't mean "dying". A story set in a similarly staged setting would have overall less tension than one involving fights to the death, but would also provide a reasonable way to show that the protagonist doesn't win 100% of the time without killing him off. 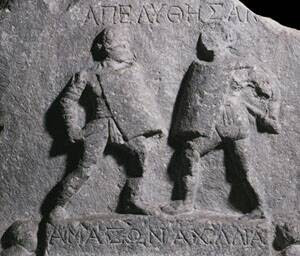 Since I talked about female warriors and how best to depict them in the last article, I'd also like to talk about female gladiators here. It's difficult to gauge how common female gladiators were, and whether or not they were "taken seriously", based on the varying evidence that historians and archaeologists have produced. However, we know for certain that they existed, and some evidence suggests that they were fairly widespread. Their main draw to a crowd came not from their combat abilities, but rather titillation, scandal, and the thrill of the exotic. This was even more pronounced if the female gladiator in question was a noblewoman who'd volunteered for thrill-seeking reasons, a group that Juvenal condemned in his satires for essentially stepping out of their rightful place in society (though Juvenal was critical of more serious female combatants as well, leading one to believe that he was just a good old-fashioned sexist).

The treatment of female gladiators, and the crowd's general reaction to them, reflects the gladiator's status as a form of entertainment. People didn't go to see them because they were good at fighting, and they didn't seem to respect them as combatants: they went because they were women who often fought with breasts exposed, and the manner in which they conducted themselves represented an attractively decadent breach of polite society. They were a sideshow, not a serious competition. It's somewhat disheartening to draw similarities between that treatment and, say, how female pro wrestlers are portrayed, or female characters in movies and video games. 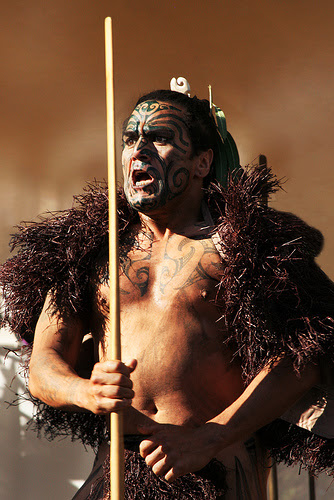 I discussed the Japanese in the last article, and how the nature of their warfare permitted them, or even required them, to combine the utilities of combat with a sense of decorum and style. The reason they did that is because their wars were about more than just winning battles and conquering lands, but were also about personal and family integrity and reputation. The meaning of "war", for them, was different than for most other parts of the world, and when there was a culture clash they had to adapt to it. They were used to war being a part of life and social interaction, even though a great deal of Japanese history is actually very peaceful. The natures of war, when they arose, were still bound by the traditions and cultures of the people that fought them. Certainly most cultures have some "rules" for war, but these are usually for moral or diplomatic reasons. The "rules" being about honor in a martial sense are more rare, and usually tend to be associated with a more religious or spiritual view of combat.

The idea of war as being more ritualistic than utilitarian is known as endemic warfare, which is also called (fittingly enough) ritual warfare. Many cultures around the world practice or practiced this sort of warfare, and it's useful for those cultures when combat is considered a necessary part of society and masculinity. In some ways it is to war what farming is to plants and animals: a way to consistently create a required product with little fuss. Sure, people die and all that, but it satisfies a cultural need for violence (for multiple reasons) without actually doing a huge amount of damage. Actual "real warfare" is conducted only against those who present a legitimate threat, or "don't play by the rules". Basically, though, the fact that the war is conducted for social reasons, rather than strictly utilitarian ones, means that there's a different set of criteria used for how combat is conducted, what rules are involved, and so on. 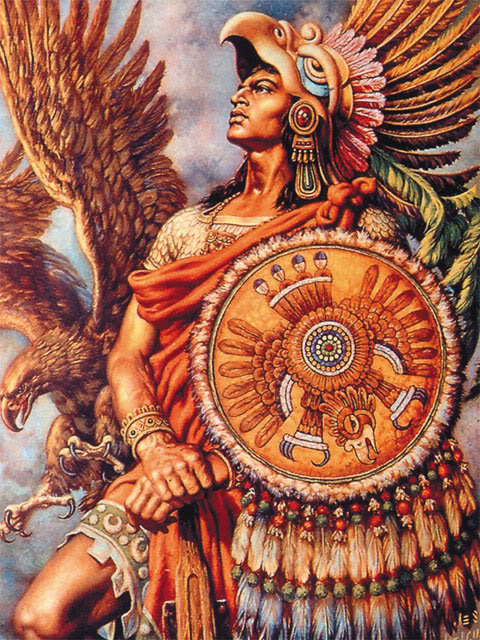 A good example of such a society is the Aztecs and their "flower wars" (that link is worth reading if you're interested in the concept). Flower Wars were basically fought by the Aztecs and their allies against their essentially-pacified neighbors, who were too weak to legitimately resist them. The reason for, and exact nature of, these wars is argued, but a popular consensus is that they were fought to provide slaves for sacrifices (as "captured in combat" was a necessary attribute for certain sacrifices), as well as to provide combat experience for Aztec warriors, which was integrally tied to societal status. This justification established that Aztec warriors would need to capture, rather than kill, their opponents, since one can hardly sacrifice foes who are already dead. The ritualized nature of the combat meant that the Aztecs and their neighbors often had incredibly extravagant outfits related to their position within Aztec society, because it was as much a religious or cultural ceremony as it was a battle.

Like the Japanese and the Mongol invasion, the Aztecs had their own culture clash when they were faced with Spanish conquistadors. The Aztecs, who'd been fighting in a ritualistic fashion for centuries, suddenly found themselves fighting an opponent who actually took it seriously, and their need to adapt cost them several early battles (though the speed at which they adapted varies by source). War, to them, was a sport, with rules to be followed. They weren't stupid, of course, but they had to change their tactics and their ideas when confronted with people who were doing things in a manner other than that which they were used to.

Examples like these reinforce the importance of a culture's perception of death (or "death perception"). If you're of the opinion that death represents the end of existence, then of course you're going to fight as seriously as possible unless there's a mitigating factor such as saving one's friends or family members. On the other hand, if you believe in an afterlife, or especially a warrior afterlife that rewards bravery, it's going to change the way you look at things. The intangible world of the spiritual is a major motivation if you think it exists, because it's a goal to work towards. Your life can be used for something, rather than simply "ending". In such cases, "style" gains a utility all its own. Of course, even Vikings, who believed in Valhalla, tended to wear sensible mail armor and helmets, so maybe in some cases it's better to take precautions just in case.
Posted by J. Shea at 2:07 AM