S.T.A.L.K.E.R. is a setting founded on a short story ("Roadside Picnic") and a film ("Stalker") detailing an alternate reality centered around the Chernobyl disaster. Most gamers know it from video games: "Shadow of Chernobyl", "Clear Sky", and "Call of Pripyat". As a game, STALKER works with a lot of the concepts that I've talked about in the past. It has a central defining element to its setting. It uses realism to make fantastic things seem more notable. Its characters are dressed and equipped reasonably for the settings. It has an open, internally-consistent world. It is one of the purest "reality + weird things" settings available. 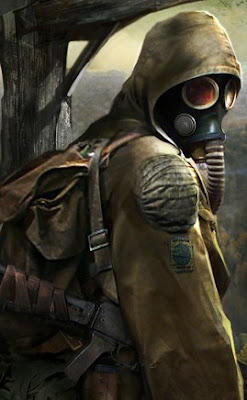 STALKER takes place in an alternate reality that is, for most intents and purposes, identical to real life. The primary difference is the Chernobyl reactor, which was used to study psychotropic weapons and technology. These experiments were responsible for creating the Zone of Alienation, a massive area around the plant where strange phenomena arise. This includes unusual or impossible weather patterns, ghostly anomalies, and hostile mutated creatures.

Due to the deadly nature of the Zone, the policy of nearby governments is essentially to leave it alone apart from some minor military presence. However, the Zone also offers rewards for the diligent. Certain hazardous areas of the Zone naturally create artifacts with various magical effects, such as regeneration and increased vitality. This has led to a booming economy for those willing to venture into the Zone and retrieve these artifacts for use in the "real world". The people in the Zone are hardy adventurers who bring whatever they can from the outside (food, clothes, gear, guns) and try to survive in the harsh environment.

So this gives us two concepts. On the one hand, most of the world is normal. On the other hand, the Zone is weird. The setting's technology and basic assumption of human functioning is based on the former, and the defining elements of the game are based on the latter. In this way it can be compared to Demon's Souls: a "normal" world exists, but the game takes place entirely in the "weird" world. Outside of the Zone, the world functions as normal, and this is the source for all the food, weapons, and gear you find in the game - it was brought in from the outside. Compare this to a post-apocalyptic game, where the source of such items is generally based on scavenging and looting ancient items (that are still somehow functional).

The design aesthetic of STALKER is, naturally, based on reality. It's meant to evoke a combination of military surplus and survivalist gear; the equipment carried by the average STALKER is generally stuff a regular civilian can obtain, with the natural exception of automatic weapons and so on. STALKERS, including the player, are outfitted with carrying gear, armor, radiation protection (in the form of gas masks and chemical warfare suits), and everything else they might realistically need in the Zone. It appeals to tangible items, including those that you personally might own or could buy.

The Zone is a classic example of an open, detailed environment with borders around it. It is a detailed, largely self-explanatory ecosystem that the player can interact with. It has three categories of interactive material: people, creatures, and the Zone itself.

People
The people found in the Zone are generally either adventurers or military personnel. There are three consistent factions of adventurers in the Zone, though others come and go. The Loners are the neutral faction, and consist of independent STALKERs who simply want to make a quick buck and avoid dying. "Freedom" is a group devoted to studying and understanding the Zone, and are generally laid back. "Duty", on the other hand, is a hardcore paramilitary group dedicated to stopping the Zone's expansion. There's also various mercenary groups and bandits that populate the area, but they're less important.

The three main factions reflect three different opinions about the Zone: "like it", "don't care", and "hate it". They also have three overarching personalities: laid-back, profit-oriented/survivalist, and militaristic. This allows for a simple, but broad, spectrum of player identification instead of the usual good/evil split. Players might identify with them based on their goals, or they might identify with them based on their outlook. A player might not care one way or another, but poor treatment by members of Duty would make them support Freedom. It's the kind of setup where there's no "right" answer except for what the player personally thinks.

In addition, the behavior of fellow STALKERs is pretty reasonable. When they're encountered in the field, they're doing something - patrolling, exploring, gathering artifacts, or whatever. In fact, you can ask them what they're doing and they'll tell you, and if they're on their way somewhere you can ask to go with them. It's simple, but it makes them actually feel like fellow inhabitants and not just random spawns. The conversation system isn't particularly in-depth, but it's sensible. You can ask people what they're doing, what's going on in the Zone, etc. In fact, one of the easiest ways to gather information is just to ask people about new rumors. It's a sensible way to interact with an environment, and again it makes them feel like they're part of the Zone, not just random AI characters.

Creatures
The monsters and mutants in STALKER are one of the more immediately fantastic elements of the series. There are two major groups of creatures in STALKER: animals and humanoids. Both groups are essentially mutated versions of real things; the former consists of mutated pigs, dogs, rats, and so on, while the latter has a bit more diversity and includes psychic creatures, invisible creatures, and giant creatures. While they're fantastic in nature, they're supposed to have real roots - they're either mutated animals or mutated humans, and in the latter case the method of their mutation determines what kind of creature they are.

One of the important aspects of the mutants in STALKER is their contribution to the sensory atmosphere. Due to the open-world nature of the game, enemy encounters are rarely direct in STALKER. Instead, the player must use their senses to detect enemies and avoid being ambushed. The baying of dogs, the growling of "Snorks", and the roar of a bloodsucker are all distinctive noises that allow the player to identify threats and move to engage them. This creates atmosphere by making sound an important, constantly-relevant aspect of the game. It's a natural cue that gives the world more depth, because the player has to respond to it realistically. The open world gives them a lot more freedom to be "realistic" and changes the dynamic of player-mutant interaction.

While there's not a widely-explored ecosystem, the creatures all feel like plausible hunters, at least most of the time. Everything hunts to eat, and if they do manage to kill something they can be observed feeding on it. Bloodsuckers, for example, can be seen taking fallen enemies to their lair, while fleshes (pig-based mutants) will drag mutant dogs away to eat. Like the human STALKERs, they have a purpose within the zone - to survive and thrive. Their habits may be a bit unrealistic and exaggerated, but they're serving a clear purpose in the ecosystem.

Environment
The Zone itself has a few naturally occurring dangers apart from its inhabitants. The most prominent of these are the anomalies, locations within the Zone that have strange, dangerous properties. They may be electrical fields, pockets of deadly gas, or air that bursts into flame when something walks into it. In most cases, anomaly fields cannot specifically be seen; there may be a haze in the air or a shimmer of the light, but the danger itself does not manifest until something has entered the field. For this reason, STALKERs (including the player) carry around small metal bolts to throw into the field and set off the anomaly. Through this method a STALKER can plot a course through the safe parts of the field.

The reason that STALKERs even bother with anomalies at all is due to the fact that anomalies spawn artifacts, small items with diverse magical properties. As mentioned, the artifacts are the main reason for the STALKERs being in the Zone at all. STALKERs go into anomaly zones to collect artifacts by using portable handheld detectors (which come in various types). Artifacts can either be used by the STALKERs themselves or sold to corporations and researchers outside the Zone. Hence, the player can often find fellow STALKERs investigating anomaly fields and gathering artifacts. This helps reinforce the sense that other people have their own reasons for being in the Zone.

The Zone's other major danger is emissions, also known as blowouts (video link). These are periodic storms that kill every creature not in proper cover (i.e. underground or a secure bunker). This includes humans and mutants; NPCs as well as the player will seek shelter when a blowout is imminent. In fact, it's possible for them not to, as corpses can occasionally be found after a blowout. The need to take shelter from them is a plot point in Call of Pripyat, explaining why the three main factions all consider the same station as neutral ground.

Anomalies and emissions aren't just random events, at least in a meta-sense. They're believable, explainable events that occur as regular parts of the Zone, and they affect the behavior of its inhabitants in a major way. They provide something for the player to interact with in the same way that NPCs interact with it. It's not a special, scripted event - it's a normal part of the Zone. Without anomalies and artifacts, there's no reason for most people to be in the Zone. Emissions aren't necessary for motivation, but they're a major issue within the Zone and affect the way people and creatures act.

Conclusion
STALKER works largely because it makes sense. Yes, the Zone makes weird things happen, but they're consistent, rather than totally random. This means that human beings (including the player, naturally) can figure things out and adapt to them. It doesn't tell you up front how to deal with anomalies or mutants, but through experimentation, exploration, and talking to fellow STALKERs, it can be dealt with. It has a lot of depth because everything works and everything has a source, and the one thing that doesn't (the properties of the Zone) is basically magic anyways. It's realistic in enough ways that the unrealistic parts seem more meaningful, and it's open enough that the true nature of the Zone and its ecosystem are allowed to influence the player.

So, To Sum Up:
1) STALKER's internal consistency allows the player to meaningfully experiment and interact with the environment.
2) The combination of realism and fantasy makes it seem more tangible and relatable to the average person.
3) People and creatures within the world have natural, sensible reasons for doing what they do.
Posted by J. Shea at 3:26 PM

Email ThisBlogThis!Share to TwitterShare to FacebookShare to Pinterest
Labels: analysis